Pvp Also known as Player Vs Player, is the combat system that we use in RPG. The process of pitting one characters combat skills against another, and seeing who defeats the other and comes out as the winner. PVP can be really fun and character building, however in order to prevent saltiness, toxicity or other problems we have instigated a system that should hopefully make things as fun as fair as possible.

Rules
When engaging in a fight with another player there are rules that MUST be followed no matter what. Breaching these rules and guidelines is a direct breach of site rules and will result in a warning.

The Hit or Miss Dice can be found underneath the posting table when writing a reply to a thread. 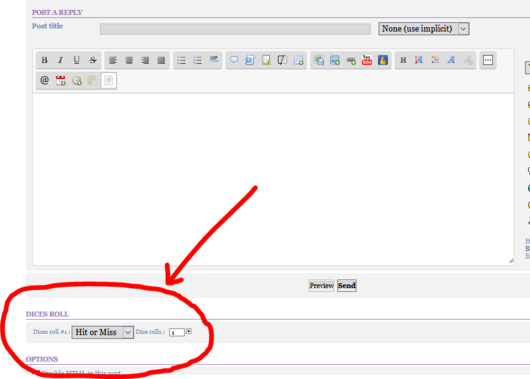 Simple change the dice to Hit or Miss and insert the number of rolls you wish to do. Remember that you can only do the same amount of rolls as your current Accuracy Skill Point Attribute located in your Statsheet. So if you have an Accuracy Level One, you can only roll once, the maximum number of rolls that can be done is Three. Once you post the reply the Admin Account will automatically roll the dice for you and randomly generate a hit or miss.

The Hit or Miss dice has Three faces;

This means the attack has landed and the enemy will take both the damage and the effects of the attack. The chances of landing a Hit is 30%

This means the attack has missed and the enemy does not take any damage. In the circumstance where Burst or AOE spells are used and the enemy is in range, they must actively dodge the spell in the post for this to apply. If they do NOT move or counter the spell in some way, they will still take the damage. The chances of landing a Miss is 60%.

This means that not only has the attack landed but that it was a Critical Hit. As such the attack deals double damage.
The likelihood of getting a hit can be increased by getting more Accuracy Skill Points. Regardless of how many Miss Dice are shown if there are at least ONE Hit dice on a hit or miss roll, the attack will still make contact.  With more Accuracy Skill you can roll more dice and are more likely to roll at least one hit dice.

Players can reduce their enemies Accuracy with Blinding effects, which essentially is equal to -1 Accuracy Point. However, players cannot be brought below 1 as this is required to use the Hit or Miss system. Blinding Effects can be countered with the use of a Vision Potion, which must be declared before use in the PVP.

Members can Opt Out of the Hit or Miss System, however, when doing so they have two options that MUST be declared before engaging in PVP. (This can be noted in a post before the fighting starts)

Option 1.
Pre-determined Result and Pledge to Fight Fairly.
Members must declare the goal or outcome of the fight, and pledge to accept the outcome regardless of who wins. As long as both parties follow the rules and our mindful not to auto-hit or auto-dodge throughout the exchange. If Staff decides that any party has been unfair or broken site/pvp rules they will receive a warning.

Option 2.
Statless or Plot PVP. This is an agreed pvp where no numbers are used and the pvp is done purely with plot in mind and without mechanics.

Equipment
In PVP, you MUST declare your equipment before the PVP starts, this is so the match is not manipulated mid-game to adjust a players advantage. Players can bring in two In hand equipment, One full set of On Body Armour, and 5 Items/Potions.

To declare your equipment, you can do so in this thread here. Staff will quote your declaration upon approval so that it cannot be edited later. If you are found to be sneakily uses weapons or items you have no declared, you will receive a warning.

Attacks
In PVP turn-taking is particularly important, which is why in stats in order to prevent players from hitting each other with fifteen attacks at once. Players in a stat PVP can only cast four of each spell type per post i.e. 4 offensive, 4 defensive and 4 healing. Please note that in PVP, when using Multi-Hit spells you are only permitted to use one at a time when attacking your opponent, and its hits are capped at a number equal to the duration of the spell. Melee attacks are limited to 6 attacks per post. This is to prevent damage stacking and means you will have to approach PVP in a more calculated manner than just overloading the target with damage.