many years ago, before the holy war was even a thought among the people. A time when Beast races did not exist to be slaves to the pesky humans. A forest, full of animals and monsters, hunters and travelers. In the distance talk of a great battle sounded, two magical monsters of beast fighting over territory. However, this was not the case if you know the monsters of who they spoke. Two Silver Green Fire Dragons, and not just any kind of dragon no an elder dragon. Bigger taller and stronger than most dragons. The battle didn't take long and before it was a clear winner one fled the scene right towards the forest. Days passed and more people spoke of the wounded Elder dragon in the forest. People were scared and wanted to hunt it away and make sure it did not come back. However, when people were hired to hunt the wounded dragon down they only met with death or a near-death experience.  A lot of the people send to take care of this wounded beast soon found out that despite its big appearance it was still a young Elder Dragon, one with little experience in life outside her parents' den.

However, the dragon before everyone, was one of Sivaas, the beast dragon of the Deathrock. A monster of legends a great terror. A scholar noted that the Dragon was a young Female Elder dragon. A late flyer, kicked out by her father who she bares the crest from. The Green scales slowly grow into silver-white ones, Green horns like antlers. As well as green frills on her tail and back and her wings dark green with white spots of scales. According to the Scholar, this dragon was one of the beast's children, Sivaas. Veddu'ul Sivaas, or as most called it the Black Crown Beast. But how dragon names were given was unknown to most scholars it was to one would give its own name then its name would spread fear among people. However, the scholar currently at the location of the offspring of the Beast told that it would be dangerous to keep this dragon here. Either lure it away by the promise of treasure, fight it or even hunt it down. Yet people tried to fight it and hunt it away only to end in failure.

It was nearly a month that the dragon stayed in the forest, the offspring of the beast. Causing not much trouble for people however those who got near only were met by flame. One day the dragon flew over fast, flying north as fast as they could. The scholar followed it only wanting to study it, traveling days behind it the scholar heard that the dragon had taken roots in the tundra and already caused more problems than before. As talk of a fieriest battle happened in a den of a wyvern, Only for the wyvern to be slain. It was interesting to see a fire dragon go to a cold temperature yet it was not unheard of. The Scholar stayed in a cabin noting down everything, the cabin was placed just outside of the tundra near a forest. Some spoke of the dragon knowing it was an offspring of the beast yet once it was time the name Nahkrah Sivaas was known by most in this area.

The recent events caused Sivaas to travel, meeting Shane a Draconyte, a beast race. Sivaas never heard of those but she was now counted as one of them. Though she did not understand her body whatsoever, how did these people walk with that added weight in the front and keep their balance with just their tail? It was hard to walk for long times and when she took a break from walking she just got angry at herself because of her wings being broken and wounded. As much as she wanted to get into a city, something inside her stopped her. It was pure fear that prevented her from entering, fear of being chased out of the city the moment she entered, fear of being hunted again. As much as Sivaas was mostly the hunter her father made a daring promise, and not only that she saw what humans could do. Now being wounded and dripping in blood Sivaas know she had no chance at all in a fight and so avoided everything. Even with the warning, her father had given so many years. If she would ever return she would be killed, Even when she was allowed to lick her wounds in the Hoptus forest before she got chaced away by her dad. She needed to get back to him, ask him for help as much as she hated it and feared him.

With days of traveling behind her, she met eyes with familiar trees. Entering the forest, Sivaas looked around, no animal or monster near. Her presents alone made animals uneasy and scared them into hiding. In the distance, a cart moved up to her, a horse before it all of a sudden stopped moving once it saw Sivaas standing on the road. You could hear the man behind the horse yell at it and before anything else Sivaas just kept walking deeper into the forest. Getting closer and closer to the horse, the animal seemed to get uneasy and scared.  Once close enough the horse jumped onto its hind legs and tried to get free but the owner of the cart kept it in place. Walking past the cart the owner looked at Sivaas, "Oh gosh, Girl are you alright!" the man spoke only for Sivaas to keep walking and ignore him completely. Before the man could jump out of his cart Sivaas noticed the horse got more scared and with a good sign, Sivaas turned to face the horse and smiled, Only for the horse to start sprinting full out without a warning taking the cart with him. At so a conflict was avoided and Sivaas kept walking.

After a bit, Sivaas came to a hill, one where she all those times ago fell down licking her wounds. Yet again she came here to lick them this time out of fear and danger as well as wanting to return to her own body. The tree she broke so many years ago still stood there broken and hollow. Sivaas took a breath and without anything, she sat down fast against the tree trunk and before anything she fell asleep right there. 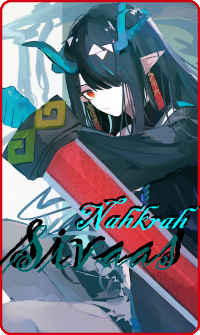