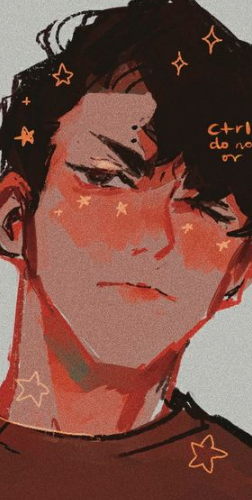 Ahote should've known. Aeluri and Iris being who they were, there shouldn't have been a shadow of a doubt that this hidden compartment of Boomslang was made to meet their licentious needs. Even so, he sat there on the side of the bed, horrified and baffled that such a construct was made right under his nose—and he lived here! To think the broom closet was a gateway to a much more promiscuous sanctuary was nothing short of unbelievable.

"I—You!—Where do I even begin with something like this? Listen, you and Iris need to..." Ahote began irritably, his head tilted and eye twitched just fractionally as he processed it all, a telltale sign that Ahote was about to launch one of his prudish tirades again when something unforeseen began to unfold.

Oh? It looks like it's working...
Fwoom! A magic circle of unusual power appeared beneath him, and not even Ahote could detect its power until it finished casting. In a matter of moments, the typical banter between him and his friend had come to a halt.

Ahote jumped to his feet and eyed the room frantically. What was this? Who was this? A man of his caliber could've detected the caster of this spell from miles away, and not only that, but he had his undead posted around the property like litter—they served just as well as cameras as they did bartenders. Despite all that, Ahote still couldn't sense the caster's presence, much less detect any familiar magical energy from this spell at all!

Ahote wasn't a stranger to threats and danger—he slept every night with one eye open, especially since he settled in the law enforcement's home turf. A man like him had to stay on his toes at all times and expect the unexpected. Prepare for the worst-case scenario and never leave a trace behind. But this was... different. Too different. Too fast, too. The magic was alien, the caster might as well've been a ghost, and it was all happening too quickly for him to even finish his sentence.

I have you now, Gorilla! It's time for you to return to my side!
A disembodied voice reached out to him, like loudspeakers in a room. The voice of a man called out to him, and suddenly it felt like his legs were heavy. Too heavy. So heavy that he couldn't move! Eyes wide and a brief rush of panic overcoming him, Ahote's eyes darted over to Aeluri as he tried to reach out to her—but he was already sinking into the magic circle.

Ahote froze as the strange power took hold of him, the magic circle opening up like some sort of portal as he fell in. There was no longer a ground that could hold him as he went airborne in some sort of ethereal space—although it felt like he was underwater. He screamed out to Aeluri, though his voice was choked underneath the density of this magical void. He'd reach out in a panic, trying to claw his way back to the broom closet, but all he did was sink. The magical portal began to slowly seal up again, and the last thing Ahote saw? Iris, tied to the ceiling, naked as a baby.

"IRIS?!"
* * *
The portal was sealed, and so was his way back to Boomslang, leaving him alone to "swim" in this dark, magical sea. The energy was so dense that it felt like water, and he felt himself slowly suffocating in this state of limbo. His voice was muffled, and his body was heavy. The fall was tranquil, but the urge to resist was violent. He squirmed around in darkness until it finally felt like his lungs would finally give out, the air sucked out of his body and replaced with this invasive energy. As a necromancer, Ahote had always teetered on the fine line between life and death, but it really felt like he'd finally meet his maker this time as he felt his life get crushed beneath this strange and dark heel.

But then the void beneath him began to glow, like a huge orb of light dropped into a lake at night. It got brighter and brighter the closer Ahote sunk, and suddenly the pool of energy around him didn't feel so dense. He could feel his chest begin to reinflate with air, and the lightness return to his body. He looked down to see an opening not unlike the portal he just fell through, the destination blurry and unclear from where he was now, but slowly gaining clarity as he approached. It looked like... a floor—

Re: An Involuntary Contract | Louie & Ahote 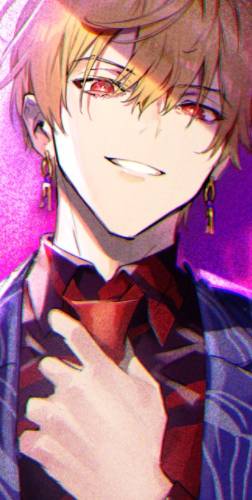 LOUIE CALVIN KLEIN
Summoning rituals—definitely something you'd see in his homeworld, but perhaps a more niche purchase in a place like Vyldermire, and nothing that any ordinary Joe had access to. But being the sugar baby of a wealthy woman had its perks, even if Louie had to swallow his pride and humor the cow. One of those prizes happened to be a tome of ancient and epic power, wielding the ability to summon an entity from another world—another dimension, even! It wasn't anything impressive compared to his former self, but ever since he came to Vyldermire, Louie found his true power muted, and had to really on petty trinkets like this.

In any case, his trip to Vyldermire was hardly a vacation to an exotic world, and Louie was beginning to ache for the familiarity of his oyster yet again. It happened from time to time, even though it had been five years now. He had a lot of unfinished business, enemies still alive, chances to take. There were people he had to punish for the crime of ignorance and rewards he had yet to receive for his achievements. Needless to say, every time he was reminded of his situation, his mood turned foul.

The tome was only capable of summoning one lucky fellow from this world beyond, and Louie was half the mind to summon Vandrad and finish where they left off and get revenge for the dreams that'd often haunt him at night. Or perhaps even Nessa, since all of the other women in this world were such bores! Yes, both of them and many more came to mind, but among them all, one stuck out among the rest—Aeluri, or Gorilla. She was supposed to be something of a mentor or guardian to him during his stay away from Napedia, but Louie ended up treating her more like a snappy accessory or terrible tourist guide instead. But with her by his side once more, perhaps she could offer him her knowledge and lead them both back to their homeworld. Kill two birds with one stone, as they say!

It was all coming together. The room shook violently as this entity was reeled from another world, but something... unforeseen came from the portal instead. Louie stood there in a wine cellar, smugly grinning at the ground beneath him as he relished the upcoming accomplishment, but the person who came forth didn't have Gorilla's cattish features or unimpressive stature. In fact, it wasn't a woman at all, but a man—an bitchy-looking one, too.

The man plummeted down from the portal, crashing into the stone flooring as if he had fallen from a two-story building despite having been unleashed from a couple-meter height. Louie didn't flinch or fumble when he saw such a violent entrance but continued to stand there with a narrow-eyed look on his face, a look betwixt bewilderment and disgust.

"...Who the hell is this?" Louie cursed under his breath, the disappointment and shock settling in.