The Quest for Kevin | Helena

The Quest for Kevin | Helena 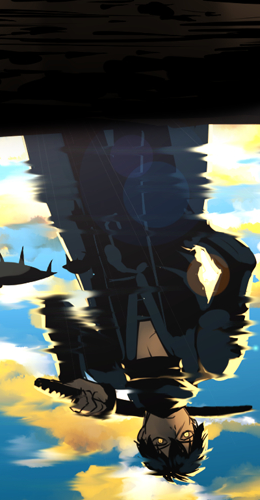 Otenshire was no one's first pick when deciding where to live, especially if you were a city kid. But sometimes, you really didn't have a say in the matter, and such was the case for Leon and Percy. They were thrust into this world and adopted this rural, agricultural town as their new home for the time being, but unlike Percy, Leon immediately got the hang of rural life. He fell into their early routines quickly and enjoyed the personal fulfillment the labor granted him, even if what they were doing was really just to pay off a debt.

Over time, his tasks gradually became more difficult—starting from moving crates and chopping would do shepherding animals and becoming their caretakers. One of those unfamiliar beasts happened to be one called Kevin. Kevin was a goat... or, well, at least Leon thought he was one. He sounded like a goat, looked like a goat, walked around like a goat—he just had double the horns and three eyes. Apparently, not so unusual in a place like this.

But the thing about Kevin was that, even for a goat, he had a bottomless pit for a stomach and constantly ate things three times his size. When his generous meals couldn't satisfy him, he'd end up eating everyone else's food, or looking for something new altogether! Well, Kevin crossed a line this time, because he had managed to escape his pen and wander into town in his epic quest for a good, filling meal. Otenshire, from Leon's experience, was a friendly town, and it wasn't like Kevin was in any real danger. Even so, he couldn't just let a goat as gluttonous and careless as Kevin wander around freely. And so, Leon ended up chasing after him, pacing through the streets in a too-tight tank top a roll of purple carrots (Kevin's favorite) in hand.

"Ugh..." Leon sighed, running his hands through his short black hair, "That guy's so fat that I should've found him by now... where the hell did he go?"

Helena stepped out of the golden door of the local honey shop in Otenshire, a small jar of whipped honey in her hand and a spoon in the other. There was a skip in her step as she meandered down the side of the street. ‘Bee Happy’ was having a storewide discount to drum up community interest in preparation for the upcoming mead festival in town. The flashy yellow signs had drawn the young traveler in as soon as she entered the rural settlement.

Now, with snack in hand, the moonlet looked for a place to settle down and enjoy the honey. It had always been her favorite sweet back home and she was eager to see if it tasted different out here in the middle of nowhere. There were such different plants around here, and what bees took pollen from affected the taste of the honey they produced.

Passing by a dusty alleyway, Helena paused. There was a sound echoing around between the buildings, a weird crunching noise. Ever-curious and afraid of nothing, the Gaiyan turned heel and headed down the dark space. The closer she got, the more her brow furrowed. It sounded like… eating?

Turning the corner to the next alleyway, her magenta eyes were greeted by a thigh-height white and brown creature. Like a living wood chipper, its mouth gradually shredded through the planks of wood of a stack of old fruit crates it was trying to consume. It looked to be some kind of goat with four horns and three eyes on each side of its oddly shaped head. Helena, unphased, squealed in delight at the sight of the hooved beast.

“Aww, you cute thing! Look at you, eating someone’s property like a naughty little goober,” she cooed in a higher pitched voice, leaning down as she approached the creature. She placed the jar of honey and the spoon in one of the big pockets in her black and gold skirt. “Are you lost, buddy?”
Post WC: 330 ❂ Thread WC: 676 ❂ Tagged:  Leon  ❂ Music: Link LEON HOFFMAN
Even after the young woman approached him, Kevin wasn't so impressed with her company to stop all of his munching and crunching. Instead, he stared at her with this lazy, dead look in his eyes while crunching away at his wooden planks. It was as if not a single thought were behind those glossy, empty eyes of his, but he was quick to notice the jar of honey she had haphazardly put away.

Interested, Kevin shuffled over to the woman and sniffed her skirt, inquisitively smooching his nose into the fabric and inching his way closer to the pocket. It was an innocent thing, at first. Most animals were at least a little interested in those who approached them, even Kevin. But there was nothing special about this woman that could distract Kevin from his task, and even throughout his curious inspection, he continued to munch away at the nutritionally useless planks. But no! He saw gold, and the gold was in that pocket!

* * *
"KEVIIIINN! God!" hollered Leon from down the street, his face nearly caked in sweat with all the shouting he was doing. Every time he'd pause after one of his calls, he looked drained and defeated, glaring at the ground as the gravity of his task burdened him. Eventually, he earned the stares of strangers here and there, but no one paid him any real mind until one middle-aged woman approached him.

"You're looking for Oliver's goat, aren't you, hun?" she'd ask him, smiling sympathetically.

"I think we saw him about half an hour ago, hun. He went that way~"

The woman pointed down the road where the alleyways became far more noticeable. Even though Kevin didn't respond to his calls, at least he was getting somewhere with all this hollering. Leon's face was already flushed, but the new information made his narrow, bold eyes sparkle just a bit.

"Thank you, ma'am!" he'd nod, hastily walking down the path!

The goat shuffled closer as Helena approached. The young woman crouched and reached out to scratch his head. The coarse white fur was hard to pet properly, but she was delighted all the same. Almost all animals were cute in her eyes, even if they could kill her with one claw. This little beast seemed harmless enough. “Crunch, crunch!” she mimicked the noise of the wood planks being crushed rapidly between the goat’s teeth. He nuzzled into her skirt and seemed to be investigating her pocket that the honey jar now occupied.

“Nuh uh, that’s my honey, silly,” she chided gently and pushed her skirt away from his nose, “You’ve got your own snack anyway.” The crates seemed rather unappealing, but goats would be goats. Anything within reach was food if the creature could chomp down on it. Helena made sure he wasn’t nibbling on her clothing in his search for her honey. However, eye-catching things would probably be the creature’s first targets rather than black clothing. The honey had been gold in the sunlight, and hanging from her neck was a silver amulet with an amethyst at its center. Helena never took it off and often forgot it was there, so it slipped her mind to tuck it into her clothes and away from the goat’s yellowed teeth.

“Where do you belong, little guy?” she asked, wrapping an arm around the goat’s back and looking around the alleyway. This was no place for a farm animal to live. “Let’s find your home… Kolimias. I’ll call you Kolimias, Koly for short!” she declared pointedly with another pat to the goat’s head.
Post WC: 271 ❂ Thread WC: 1,282 ❂ Tagged: @Leon Hoffman ❂ Music: Link