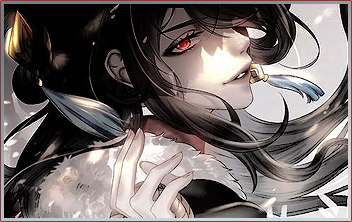 At present, there was a mellow swirl through the air and a mizzle of shadow toppling from the lush trees. Beneath the golden sunset sky, a dimly-lighted path shared by two very different walks of life hinted at the imminent descent into nightfall, and in the intervals of pleasant quietude seemed to sink and smother everything but movement and thought.

The trail was marked by travelers past and full of ruts, and a beast of snowfall-white settled down to a walk as it wagged its great head from side to side, its hefty mane cascading over its broad neck with a brilliant sheen that complimented the perfection of its soft coat.

Upon such a well-groomed horse was a woman with pins in her hair, and a face that was unkind and as frosty as her good posture; but her lips had the lovely curve, as though they could blossom into a smile. She didn’t smile of course as she had no reason to, and leaned forward to brush a persistent fly from the horse's neck, her nails of the deepest burgundy-red grazing the skin so delicately.

Her sweet Diarmuid fancied such warm, loving strokes and leaned desperately into her hand like an overgrown puppy, forgetting himself in the bliss of her motherly affection. She raised an oddly playful eyebrow, and pampered her precious stallion with yet another affectionate pat, only this time when the beast leaned in for more, there was an ulterior motive, for the horse drifted a little too far to the right and seemed to take an extraordinary interest in a traveling charlatan with pointed ears and a garb that was perhaps the most vibrant thing in this fair stretch of land.

It didn’t take the eldritch long to decipher why  Diarmuid decided to stray from the path and follow the nomadic bloke.

If only she were a more vocal woman in public, the vampire would have surely yelled a warning. Instead, she resorted to doing things soundlessly and carefully, by tugging firmly on the reins. She hoped to derail her mount and evade an unnecessary interaction with the harmless merchant. Her giddy companion tossed its massive head back and clopped rebelliously to the only other wanderer in these parts, an undeniable contrast to the general vibe of its unamused master, as it nuzzled the painted man’s cheek with the side of its face.

There was an awkward pause, one in which the vampire held her breath, and tried even harder to deter Diarmuid from doing what he wanted. The naughty horse was not of the same mindset as her, and so, being a spiteful little thing, dragged its broad pink tongue over the side of the poor Gaiyan’s face before plucking the apple clean from his hand with an enthusiastic neigh.

Aurora flushed to the ears with embarrassment, eyes widening uncomfortably through bangs of the darkest black, as she peered at them through her lashes. “What have you done, Diarmuid?”  She asked the dear creature in a voice that was melodic yet reprimanding, watching as the horse happily crushed the apple into sloppy little pieces with his powerful teeth.

She knew well enough what had transpired: her horse had seen that the elf was holding the forbidden fruit and wanted a taste. Amused as Aurora secretly was, this humorous incident left the stranger relatively fruitless, and she understood that she needed to apologize. At the same moment, the stream of light peering through the trees cast a faint glow on the woman, showing her features to be in the most peculiar harmony with her voice. “I’m sorry.” She said, allowing her long black hair to drag behind her as she descended like it was almost second nature; feet now on the ground.

From what she could only base on shallow assumption alone —he was perfectly fair and seemingly young—time was lost on him as it was on most native to this world. His complexion, though fresh with vitality, was a trifle too covered by vivid paint, as though by aesthetic impulse or cultural demand. While very curious about the markings on his face and their profound meaning, if they had any at all, she desired minimalistic engagement.

“In all the world you won’t find another horse with as much love for people and apples as wee Diarmuid.” She broke the ice eloquently, her accent rich and deep, with all the qualities of a storyteller, as she unfastened a small bag that was strapped about the saddle. She retrieved the unpeeled orange wrapped in a small tissue and extended the peace offering to him with a simple request: “I will not be taking up any more of your time. Wyverns are not known for their bleeding hearts. Farewell with you, now.” Recalling a peek into the old days when she tamed beasts greater than herself without revealing so, and yet her last words had been uttered without the weight of much authenticity.

It seemed her inner and outer strengths had dwindled with the centuries, leaving a well-dressed doll to respond civilly to the mundane and disappear.

The breathing cleome graced the opening of the bag and closed it in a leisurely fashion; sounding the finality of their meeting with a resounding click of the lock. The slumbering artist in her had a question that burned for him still. It was not her place to ask nor could she find a more appropriate way to inquire about it. It would live on under the guise of a grand mystery, one of precarious intrigue.

The buoyant spirits of the apple-gratified equestrian receded and discomposed braying stole away the conclusiveness of her decision. Disconcerted Aurora had grown wordless, and as she steadied her companion, he tossed his ivory head, his big eyes of daunting ink whispering the unheard horrors of things unseen. “Diarmuid.” She commanded, being careful of how she addressed him.

She knew she had a voice quite so unattractively powerful, one that was as thunderous as a storm, and she knew it was most imperative to keep her tone firm but soothing lest she frighten the darling. And then, the trees darkened, an ever-expanding growth that looked cancerous kissed along the ridges of the bark and darkened the leaves. Aurora froze, Diarmuid’s panic brought her the distress she refused to exhibit; the unnatural phenomena overcoming their patch of the forest with maddening haste caused the adrenaline to course violently through her veins.

She couldn’t explain it, she couldn’t pin anything down, and just like that she started with what she could see and addressed it. She refused to face the only other fellow in her presence, not until she was sure her confusion had passed visibly upon her countenance: “I learned long ago the trees here never lose their leaves; they change colors at the very most and thrive year-round. This is unnatural.” She said pointedly. The ominous fall of greenery, formerly so lush and beautiful, engulfed them like a baleful curtain and piled over their feet with all the liveliness of a corpse.