It All Ends Now [Sage]

It All Ends Now [Sage] 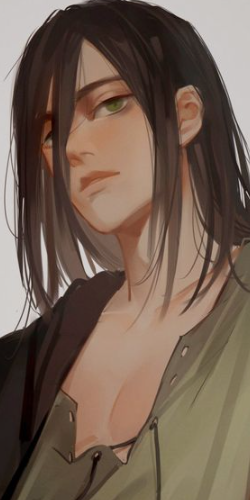 COLE
"Are you... Sage?"
Dressed in a brown woolen cloak, a young man of unimpressive stature stood at the merchant's stand in the middle of the town square. The hood on his cloak was a size too large for him, and while the features above his nose were concealed, you could see how well taken care of he was beneath. Unlike the ruffians and commonfolk he waded through on his way to this merchant, his lips weren't chafed and chapped—but peachy and soft like the rest of his skin. His hair was long for a man, too short to drape over his shoulders, but dangled past his neck like strands of oaky brown silk. Normally, it'd be tied up into a bun, but like the last few days, it was becoming a mess.

Cole slightly rose his head as he patiently waited for the merchant's reply, revealing just a small sight of his stunning shamrock eyes, similar to that of emeralds or some other jewel. But the expression on his shadowed face seemed dull—stunted. The way he stared at the merchant's wares with unwavering interest, there was resolve in his eyes fueled by a conviction like no other. The look on his face was lost and unemotional, and yet it seemed like he was here for more than just an errand. Ah, Newdale... as a cesspool of lies from Eldritch who desperately wanted to slum it with and get acceptance from humans, and humans who pretended they didn't hate their sinful counterparts in the interest of "utopian society" and "peace"... or whatever perceived actual benefit they gleaned from it. They all hid away their natural impulses and pride in their races in favor of white picket fences and potlucks and a smiling "blended society", all the while keeping their natures alive and well in the shadows and back alleys.

How did Sage know? Well, business was booming in Newdale.

But their money still spent, and thus Sage stood just at the mouth of an alley off of the main square, hocking his potions and other wares on a rickety folding table. His large brimmed hat drew the eyes of passersby, to which he offered the cures to whatever ailed them and convenient fixes to pesky social situations. He sold an alarming amount of harmful potions here, as opposed to the majority of his business being more of the 'little blue vial' variety in literally any other town. Potions to mute people, potions to cause extreme pain, potions to paralyze, potions to kill... this town had a lot of people they wanted to either disappear or appear naturally ill. Mostly the mouthy ones or those with very visible unsavory habits. All in the name of those white picket fences and progresion!

Though he was in no way supportive of such loathsome progressive sentiments no matter how real or fake, he was in the support of vigs in his pocket. "Sage Gwydion, yes, of the Gwydion bloodline, can provide what you most desire! I am many things, but I'm no liar! Won't you take a chance and stop and browse, my potions and spells cause curiosities to rouse!" COLE
Cole paused as Sage punished him with his cheesy and mildly obnoxious spiel, but kept those thoughts to himself once he realized that this Eldritch was, in fact, Sage. He wasn't here to chit-chat or suffer through whatever this man had to peddle to him, but he was the only man he could think of for the solution to his problem. A glance at his stand during errands with the Lady and a rumor bounced from here and there eventually led Cole here, quietly mustering up the resolve to say what he wanted to say. But the courage hadn't come quickly.

"What kind of... poisons... do you have?" Cole mumbled harshly, shamrock eyes bouncing from vial to vial without an iota of knowledge in their differences. He didn't know about this stuff. How does someone come to know about this stuff? It's like all of the assassins he's ever known of had been doing it since they were a babe, and the ones who hadn't... well, they ended up in the newspaper.

Whatever. It didn't matter, did it? He had danced between doubt and conviction all the way here, but now he was standing before a stranger who'd sell him his freedom. He couldn't turn back now. He couldn't chicken out of it all now that he was here.

Sage stood silently judging him for a long moment, wondering if his loud gaze would make the boy shrink out of existence. A poison, hm? Of course, it was a poison, this was Newdale! Boning random people and blinking themselves blind wouldn't remedy issues here in this utopia! No, the only way to solve the issue was with sometimes permanent damage!

"What is it with you people and poisons?"

The remark was sour, not the sickly sweet tone of the salesman who had been spouting truly inspired rhymes off the top of his talented little head seconds earlier. Sage could only be cordial so long.

With a sigh, he picked up the entire table of potions and sat it back in the alleyway, only to produce a second table with similar potions on it that this kid would likely be unable to tell the difference from. But, oh boy, was there differences. "What kind of poison do you need?" the witch asked in a bored tone, his fingers dancing over the corks of rainbow vials. "We've got a variety, depending on what exactly you want for the outcome. Slow necrotization of various tissues starting at the toes if you want death to be slow and painful. This one destroys their vocal cords, this one hatches worms in the eardrums for deafness, this one makes all food taste like sewage, this one makes their eyes fall out. Oh, this one destroys the nerve endings for either numbness or unending pain, which is popular for those who want their victim to take their own life.... This one they poop to death, this one they starve to death, this one they fall into a coma for a few weeks and can only wake with true love's kiss, this one damages the inner ear so they can never do yoga again.... and of course, this lovely black one and perhaps the most obvious but boring one, is just good, old-fashioned instant death, great to drop into some food or tea," he rattled off, watching his customer for any sign that he'd hit the right one. Who was the poor sap that hurt this guy? It was an idle thought, one he wouldn't have cared to listen to the answer to, though.

"So, quite literally, pick your poison. Then cough up some vigs, would ya? You'd better have some, this isn't a charity," Sage warned, wondering if such a low-born looking guy would have enough money on him to even pay for services.

COLE
While the peddler possessed a great variety of different poisons, only the black one could captivate Cole. Its color was deep and dark, eerie like a quiet lake at night, its waters cold and still, squashing life's little embers beneath its tranquil waves. Perhaps the results were far more uninspired compared to the rest of the poisons the peddler offered, but they made him feel uneasy... as if each gruesome effect was just one of many outlets for his true feelings. The black poison didn't seem so invasive and prying—as if it wasn't forcing him to face all the nuances of his true feelings but gave him the power to see it through anyway.

It was useless dwelling on it.

When the peddler asked for vigs, Cole dropped a pouch of unremarkable size in front of him and eagerly snatched the poison into his hand. He stared at it, the black sea so deep and dark that he could see his face reflected back at him when he stared into it. He moved it around his palm until he could see his stunning shamrock eyes beam back at him from beneath his hood. It's funny—from the way his mouth sort of hung open and how tense his body looked, it seemed so easy to say that a low-born looking guy like him was anxious, perhaps a step away from trembling with anxiety. But, no, that couldn't be the case—because those eyes burned like jewels, hardened beneath the flames of unadulterated hatred and opportunity.

Every time he'd stop himself from mulling over it all, he'd find himself, once again, dwelling on it.

Sage snatched the pouch and dumped the coins into his hand, counting them like a miser about to make his employee work over on the biggest holiday of the year. There was technically one extra, but if this hobo didn't know how to count and ask for the change, he might as well keep it. "Just enough," Sage sighed as if begrudgingly accepting a lowball offer.

The way this kid was gripping and eyeing the vial was just... there was something about it. It was like the guy would keel over right in front of him from pure nerves, yet... he thought he could be mistaking it, but... the kid seemed excited. What a psychopath!

"Alright. You have your liquid death. Happy murdering and thank you for shopping Sage's," the witchboy prompted, less out of gratitude and more to urge the scraggly boy away. He seemed unhinged. Sage wouldn't be surprised if his customer started giggling as he left... if he didn't hyperventilate first. Or maybe this guy would like... rob him first? Couldn't trust humans, which he assumed this guy to be. If he'd had a gun, he would have had his hand on it just in case, but instead, his fingertips tingled with energy.

Once the guy was well and truly out of sight, Sage started putting his 'dark market' potions away and started to place his usual wares out. Oddly enough, as he finished up the swap, his hand grabbed a black potion similar to the one that he'd just sold. The issue was, he only had one of those in stock... so what had he sold that guy if not this one?

Sage paused, eyes distant as he thought about the accidental swap for just a moment, but quickly uttered an uncaring "meh" before shrugging and going about his day.

Oh well, the midnight blue one would kill as well... eventually...

Similar topics
» The Bunnynapping [Sage]
» You Are [Not] The Father! | Sage
» Satisfaction Guaranteed | Sage