"Hmph, but isn't it kind of fitting? Given that we both have- er, had family problems? Besides, I bet no one knows what an edgelord is here..."

Despite being turned down again, Percy's mouth did tug up in one corner after a moment or two and he exhaled a short chuckle from his nose in some type of victorious vibe. "So you did watch it," he said more to himself than his boyfriend, vindicated that, while he kept denying his suggestions, he'd watched the anime 'Uchiha' was from. How could he appreciate art and thrilling, flashy stories but reject top-tier names? Leon really was an enigma he didn't understand, but he would not be deterred.

Seeing Leon's slumped and huffy frustration, his lover extended a boon. "Hmmm. I'll compromise. We can put Wolfman on the list of possibilities as a last resort, but surely we can find one more interesting," Percy responded with the diplomacy of a professional that had had to field more than a few sub-par pitches as head of the R&D department of Dagger Corp. He just no longer wore the dress pants and expensive button-ups. If they did have to resort to 'Wolfman', maybe they could change the man to bane. Wolfbane...

The professionalism derailed back into comfortable nerdgasm only moments later, however. "But how about Luffy? Leon Luffy. Percy D. Luffy would be so cool," he gushed, dreamily munching on his dinner. He'd never had a middle name to have a middle initial, so that was a two-for-one. "Or Himura? Like a god-like samurai! Or Dragneel?" Percy proposed, yet he had a feeling they were doomed. Perhaps that was why his brain kept flittering over name after name, hoping to land on one that maybe sounded a little less anime or fantasy, but still had a strong enough link for him to be proud of it.

Perking up suddenly, the peppermint head had to remember to swallow his bite of food so he didn't choke on his excitement. "Ackerman. Ackerman?"

If this one didn't solve the problem, the topic would likely have to be shelved for another day. 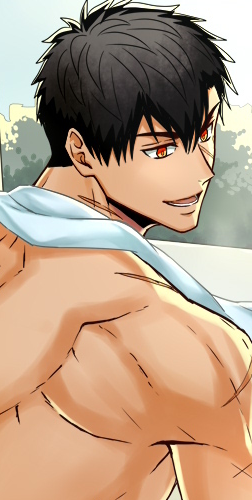 LEON HOFFMAN
As dinner dragged on, it seemed as if the two would never find common ground as far as their names went. The practical debate was edging closer towards indignant bickering with rejections on both sides.

"Yeah, no. I don't wanna have to think about those shows every time I tell people my name, okay?" Leon explained, though the suppressed expression on his face begged to differ. He wasn't as enthusiastic about these shows as Percy, often approaching them as "things to watch with my boyfriend" as opposed to things he'd watch in his free time. But there have been times where he'd binge shows on his own or really pressure Percy into continuing where they left off the next day. Despite this, he continued to reject the suggestions. Maybe he'd miss those shows more than he thought...

[Later That Evening]
His bowl was empty and his stomach was full, and yet his body felt warm and light compared to the cool night breeze slipping through the cracks of their 'shed'. He should've been used to this by now, but sometimes he'd have moments where none of this felt real—this world, their new home, their new life together. Was it wrong to find peace with his past so quickly?

Maybe 'peace' wasn't the right word for it. He still cringed at the thought of magic and there was a small part of him that thought about what his life would be like if he never allowed Percy to follow him to the battlefield, but all of his guilt and problems always seemed overshadowed by his immense love and anticipation for his future together with Percy. Even if their situation right now was littered with shitty circumstances and even shittier luck, it didn't really feel that way. He had no home to return to. If he returned back to their world now, there wouldn't be a single person waiting for him. There wouldn't be a single person looking for him. He had no commitments or obligations, just strands of memory rife with pain and suffering. Sometimes his mind would wander off into deep, dark, and depressing places like this, even though they had just got done talking about something as light-hearted as names, but Leon didn't get depressed over it. Instead, his chest felt even fuzzier than before.

He leaned back into his chair as his stomach settled on the filling meal, fierce eyes staring pensively into Percy's across their little dinner table. Suddenly, he smiled a smile that seemed softer than usual for him.

"If I die, you can't see anyone else for at least sixty years, okay?"

An odd look crossed Percy's face for only a brief moment, one that was pure and unguarded by his usual practiced blank expression tainted with general anxiety. It had flickered quickly across several emotions, sometimes in combination. Shock, grief, confusion, baffled amusement, then something a bit darker. There was a pause, then his lips parted to say something implusive but utterly true but his brain caught the words. He almost said it, the "I'll never see anyone because I'll be dead, too" that begged to be born as a concept in this world, but he had enough social graces not to toss out admissions of suicidal intentions pending his lover's eventual death.

Percy's face softened into a smile not unlike his boyfriend's and he sighed. "Hmm, alright. Sixty seems reasonable," he agreed with a single chuckle, obviously understanding that truly it was a softer way of having him promise he'd never date again. Even if Leon died tomorrow, which was a truly heartbreaking thought, he'd be seventy-nine before he could date again, and who would even try at that old, if he was even still alive at that age. Arguably, he hadn't ever tried anyway and would have likely died alone if not for Leon. "Okay. And for you, seventy. I don't trust you not to live until you're over a hundred."

He was quiet for a moment afterward, his eyes gently searching those of the man seated across from him. It was such a domesticated moment, one of hopefully many, but he couldn't say he hated it. Percy might not be nearly as settled as Leon, but he was trying. "What brought that up?" he asked, hesitantly stretching his hand over the table where he rested it halfway, asking for Leon's hand. "You'd better not... alright? Not before me."

Similar topics
» Percy and Perseus
» Percy's Tracker
» Into the Unknown [Percy]
» And it all falls down; | PERCY