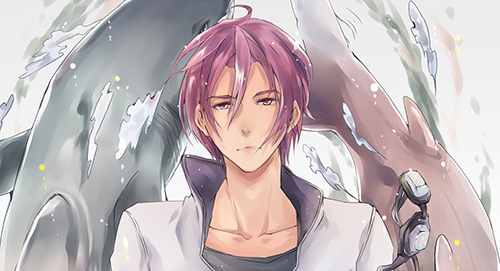 There had been a time when he had loved being in his apartment when it meant something much different to the eldest Dagger son. Artemis could reminder the day he moved in, forms signed, moving trucks, cleaners. Spending the day drinking beer and telling the staff where to put everything, parking the cars and bikes in the garage. Hooking up the wide-screen tv, inviting his friends over and letting loose. It had been such an exciting time for him, a taste of independence. He had loved it.

Now it was a stoic reminder of troubled times, the place he had gone to escape to, could not free him from his torturous thoughts. It would not free him from Morte's whisperings, or stress-inducing phone calls from his family. Or worse of all, the silence-ridden waiting. Waiting with no answer for his questions or doubts. Hidden Blades, gone. Percy, gone. Pandora, pregnant and gone. Everything he cared about was leaving him, except for one thing, one person.

He craved her so much. He wanted nothing more than to bury his face in the soft skin of her neck, to wrap his hands around her slender frame and lose himself in her. To drown out the silence with soft moans and heavy breath. To feel every inch of her, claim as his own once again, mark it with the softest nips and watch her writhe beneath him. To stare into those beautiful carmine eyes and know that she would never leave him.

She would be here soon, his girl, his Sivvy.

And the seconds on the clock simply couldn't move fast enough.

Sivvy let herself into the familiar apartment like usual, her countenance a bit somber even for someone whose emotions were still developing. The door was left on its hinges and quiet, decisive steps brought her swiftly to the elevator. Somehow this was the worst part, the last few minutes and seconds before seeing him. Being in his home but having so far to go tested her patience every time.

It had been rough lately. The Daggers rejecting her and making things difficult and Dies Irae disbanding were blows she was still learning to deal with. She missed Johann and Amalie. Perhaps she'd become a bit soft, which Dr. Raelin had warned would come with allowing feelings to take hold, but she didn't mind it. It was better than nothingness peppered with anxiety. If Artemis had taught her anything, it was that feeling things was worth it. The good was worth the bad. Sivvy wouldn't trade learning to love him for anything, just as she'd never trade the warmth she felt for her friends or her love of food and fashion. Arty's affections brought out things in her she didn't know she was capable of. Feeling accepted and wanted was... something else. Something indescribable. She'd fight anyone and anything to keep it, as selfish as that seemed. As long as he wanted her, staying together was her main mission. Sivvy was someone who always needed something to do, a new goal to cling to. Without it, she felt aimless. And lonely, when she wasn't with Artemis.

Homelessness and disappointment aside, she couldn't wait to throw herself into her lover's arms and bask in the radiance of it. It'd been only a little while since they officially had it out, worked through some things, and then crossed the line between friends and lovers, but it was as if it had just happened. When he kissed and touched her, it was like nothing she'd ever experienced before him. Though they did some of the same things she'd been expected to do in the dark creases of her past, sensations and emotions she'd assumed were dead to her were quite the opposite. It felt like fire, like fizzy champagne and rollercoaster dips and the best fresh cake she'd ever tasted, only better. It still surprised and amazed her.

With a soft ding, the elevator door finally slid open to reveal the pinkette, hair long and straight with her fringe pinned back neatly away from her face. Today she was dressed simply in a black crop top and a flowy red skirt that was shorter in the front and longer in the back. Immediately stepping out, she slipped her black flats off while carmine eyes searched the apartment for the person she cherished most. At the time Sivvy would arrive at his home, Art had been lounging in his bedroom, listening to music blare from his laptop. Lying on satin sheets in his grey tracksuit, eyes closed, arms stretch upward with his hands resting under his neck. For all the suffering it had brought him, having his soul intertwined with a demon did come with some perks - like supernatural hearing for example. The sounds that alerted the redheaded man that his girl was making her way up the elevator, would cause his eyes to open, and in one swift motion, he would hop off his bed.

Following this, Artemis would make his way out of his room, reaching for the hem of his hoodie. He would pull it up, removing it before discarding it over his shoulder, where it would land on the sofa - exposing the black shirt he sported underneath. He would then turn the corner to the entrance through which she had just entered taking in the sight of her. Her melodious voice called for him, music to his ears. There was no resisting the grin that sprung to his face, and within a few quick moments, he was upon her. He reached down, grabbing her underneath the thighs, he would scoop her up with ease. Wrapping her legs around his waist as turned her, pressing her against the closest wall and claiming her lips for his own.

There would be several heated kisses exchanged before he addressed her,  "Mmm, I missed you."

Artemis approached quickly, grinning and quickening her heartrate. Not a single word made it out of her mouth before she was swept up and pinned.

Sivvy wouldn't complain about this kind of greeting. Things like this still caught her off guard sometimes, but she was quick at adapting in the moment. Despite her early insistances that they'd be nothing more than friends or an empty hookup, the change between them had been wonderful so far. She threw her arms around his neck, his kisses met with the rising heat of her own as she delighted in his affection with the same enthusiasm she paid food, dragons, and weird clothes. Maybe even more so, since she could never seem to get enough of her Artemis. He was her teacher in the ways of passion, and the clone was ever the attentive student.

He pulled away to speak, giving her a moment to catch a quivering breath as she remained pressed against the wall. "I missed you, too," she answered with the warm smile reserved just for him. Clearly he wanted something from her, and she was more than happy to give it to him. Unlike her past encounters, there was plenty for her to enjoy with him. With her lover. She squeezed his waist between her thighs, fingers clawing at the back of his shirt, pulling the fabric up slowly. Should he let go of her legs, she was certainly strong enough to hold herself up if he wanted to remove the garment. Either way, she leaned her face in to close the small gap for another lingering kiss in the meantime. Sivvy was one for action over words anyway.

The sensation of her slender fingers teasing the fabric of his shirt upwards would elicit a most devilish smirk from the man, adjusting his stance to allow her to remove the shirt, but keeping her pinned with his body. The full feel of his excited state holding her in place. Trialling his kissed along her jawline, he would make a path from her neck, teasing the tender skin with his teeth. Nipping and marking flesh ever so tenderly, a physical reminder of his claim on her. Raising his head up slightly, he would angle his face towards her, before growling softly into her ear. "Mine."

Several hours later.
Artemis trailed his fingers through the locks of his lover, his expression one of calm and deep satiation. He had been ravenous for her, and could still hear the sweet echoes of her pleasure still ringing in his ears. He loved doing that to her, and she delivered most beautifully. He was leaning against the headboard of his super king, the exquisite beauty of his pulled over his chest, sheets in tangles at their feet and clothes discarded who knows where in his apartment. It was nice, he had allowed himself to get so lost in her, the troubles that dwelled on his mind had faded for a short time.

However, now that they were done, those reminders would slowly come trickling back into his head. Was it okay for him to enjoy himself this much, when so much else was going to shit. It was a peculiar juxtaposition of emotion. But he did know one thing that he could control at least, and that was how to please his woman. And having fulfilled at least one of her cravings, he knew what was next of his list of to dos.

"Shall we order food?"

Sivvy was hardly a soft and tender woman, but a lot of her cold exterior melted in these stolen encounters with her Artemis. The clone was insatiable and always met him with boundless eagerness and energy, but she could also be gentle and affectionate, which was still quite new. Like in these quiet moments after, when they were left to catch their breaths, the girl who could normally hardly stand wasting a moment's time on something 'unproductive' happily lazed on his chest, nuzzling her cheek into his warmth and occasionally placing little kisses here and there, either just out of appreciation or perhaps to see if he had any gas left in his tank. She never hesitated to show him how she felt when she felt it, vibrant and without shame, just like he'd unabashedly created and relentlessly pleased every erogenous spot on her body.

Though perfectly content to lay there in his arms in otherwise blissful silence, Sivvy wasted not a second perking up at the sound of her now second favorite thing. Food. Her head quickly lifted and she gave him an ernest nod, as if only just now realizing her cravings for him and the resulting activities left her stomach completely empty. Perhaps she was the one with the empty tank. It even rumbled as if the knowing twinkle in her eye wasn't clear enough. "Yes," she said, the sudden sternness a hilarious contrast to the feverish faces and sounds she'd been making only a few long moments ago. Her body coiled so that she was now sitting up, allowing him to move to do whatever he needed to make food happen.

"What are we having?" she wanted to know, finally taking a moment to stretch whatever exhaustion or sleepiness had accrued from her limbs, or possibly just giving him a little tease. Regardless of their bare state and lack of sheets, Sivvy was never one to be shy. The concept of modesty was lost on her, so she was perfectly content to stay there in her glory, enjoying the look of his possessive marks over her pale skin and various scars until their food arrived. Only Arty and food filled her mind now, so she didn't join him in returning to their separate and joint troubles. Not yet. "Seafood? Can we have fruit and cake for dessert?"