» A moonlit hunt
by Isla Paledragon Yesterday at 10:01 am

Without a single consideration for worry he might be causing, the wayward god wandered off, leaving Karimah behind to venture to the Gaiyan homeland. He may look human, but for all intents and purposes, he was a Gaiyan. The Lunar Cleansing was something he knew about in a historical sense, but he'd never experienced it in the slightest, especially from a 'mortal' perspective. In the past, he'd been vaguely aware that the spiritual realm felt crowded somehow, but he'd still be separated by a seemingly impenetrable barrier. Still, the leylines replenishing themselves with the ocean's waters was refreshing to him in his solitude as well as necessary, as were the sweet prayers and praise from his followers praying that the waters would return and bless them.

Though he hadn't been walking on two legs for long, Hakuri did indeed feel the draw of the leylines and the familiar aching of his magical veins. Magic wasn't a thing he used much of currently, but he still felt a bit drained, like those times he'd stayed up all night reading or walking. It was similar to that. He needed nourishment from the world of Vyldermire no matter what form he was in.

Getting across the sea to the luscious island had been unusually easy. Hakuri was still fuzzy on the concept of money and had none on him, but the lady at the docks had said something about his dazzling smile being worth more than the few coins needed, so he'd been admitted and enjoyed his first boat ride. Once he'd arrived, as much as he wanted to explore the Gaiyan homeland, he knew better than to get lost. Wandering around could come after the night's festivities, once he had more energy. So instead, the darling deity lingered near the beach, watching for hours in wonder as the seas rapidly retreated along with the sun, as if the burning ball of heat had burned a hole in the seabed. Once the sloping sands were extended, Gaiyans emerged from the treeline and meadows to erect poles wrapped and swagged with ribbons and adorned with bowls of water and pretty pale blue flowers. A colorful assortment of hand-woven blankets were placed everywhere for meditative comfort, and children were scuttling around collecting exposed seaweed and seashrooms to be roasted over a shimmering flame.

Once the stars began dotting the inky sky, more people showed up of all shapes and sizes, some humanoid, some tree, some with sparkly wings. As they arrived, they were handed ribbons, and groups of friends and families and even strangers began tying themselves together at the wrists and moving toward the blankets, where they'd snack, converse, and then ultimately fall into peaceful silence. When the dark-haired man approached, he was also given a ribbon, though a quick glance around yielded no one that he felt might want to join him. Was it required? could he do it alone? Would that cheapen the experience? Furthermore, were they actually communing in the heavenly realm, or just sitting quietly? Puzzled, Hakuri raised a hand to his chin, his expression the spitting image of scholarly consideration, though his rich golden eyes continued to watch for others who may not have previously arranged relationships and obligations.

No one could really miss him standing there like an awkward pillar in a fantastic suit of browns, blacks, and golds. He stared at everyone who arrived, inquisitive but ultimately inviting, sort of like a lost puppy looking for pets from kind strangers. 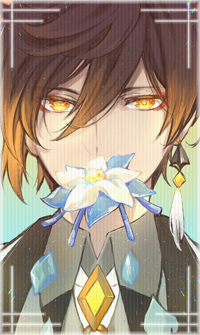 They danced through the day , And into the night through the snow that swept through the hall from winter to summer then winter again,
Dr Aries Marrow

It had been quite some time since Aries had indulged in the mystical delights of the Lunar Cleansing. His duties to Elijah had kept him away for two decades now. Not a great deal of time in the Leshen's eyes, but still enough time for him to feel the ache of nostalgic longing.  Alas, the duo had returned to their homeland, and with that came the possibility of enjoying such experiences once again. His master had been surprisingly lenient at his servant's request, especially considering the manner in which the night affected him and his lycanthropic physiology. Or perhaps that was why he had been quick to accept the creature's request, Elijah rarely sought the company of others, especially during times of vulnerability or uncertainty. He survived in solitude.

And so, with a smidgen of dismissed resistance, Aries set upon his way, returning to the isle upon which he was born. However, before attending the Lunar Cleansing, the Leshen would take on a particularly important task. Making his way deep within the Ilyanor forest, soft hues of pink and orange illuminating his path. A gift from the dusk. He would wander to the point he felt most familiar with, following the path of the leyline that ran through his birthplace. Deep within the thick of oak, spruce, willow and elm, until he arrived at a clearing. A region of green that stretched out for several yards each way, in the centre, a single tree stood in its centre, over twenty metres in height. Its arms stretched out wide, and from its branches, withered flowers faded white with hints of purple tones. A wisteria.

The very tree that many millennia ago he rose from, its body shared to him to make his own, along with the carcass of a monster that had died upon its roots. A tree that had somehow survived all this time, through time, weather and flame. A sensation swelled within his chest as he eyed his birthplace, a strange concoction of melancholy and jubilation within in. The withered flowers brought his sadness, but its existence brought him joy. For she was still alive, and how he had missed her. With a few long strides, he was upon her, palm outstretched. He would place a hand on the tree's surface, a soft gush of wind billowing against him softly, greeting the one from which he was born. For such a beast as he appeared to be, the bone faced being never looked as at peace as he did at this moment. Both Aries and the tree would begin to emit a soft glow, his head rolling back as his life poured back into the wood, and in turn energy flooded through him. The tree would begin to shift, slowly transforming, its withered flowers would return in lustre, and begin to bloom. Branches stretching out further into the clearing, reaching out and upwards towards the skies, as though waking up after a deep slumber.

~~~
The Leshen stepped upon the beach, having returned from his reunion. Whilst it was important for him to cleanse the realm, he had long felt the thirst of his Mother tree. Solemn from separation. First, he had to give back what he had taken and deprived her of, only then could he indulge in the lunar cleansing. He would take a moments pause, observing his fellow Gaiyans from a respectable distance, watching quietly as they engaged and greeted one another.

There were some faces he recognised, some uncertain glances. His absence coupled with his reputation meant that many of them likely weren't sure what to make of his presence. Whether or not they should interact with the race traitor. They weren't sure. Not that he minded, Aries was quite happy to just observe quietly, indulging this gift from his master and merely experiencing the Lunar Cleansing itself.

Moving the direction near where the poles had been set up, he would seek out a place to lie upon. Aries would also notice the ribbons tied between already lain Gaiyans. He doubted that he would be able to share in this tradition, after all, who dare tie themselves to the likes of an Eldritch's willing slave.