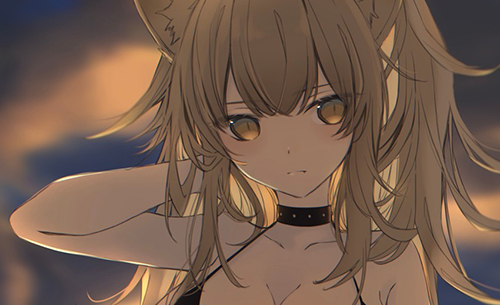 I'm in the race but I already won. And getting there can be half the fun.
So don't stop me till I'm good and done. Don't you try to rain on my...
Yasmina Elise

"I'm meeting up with my best friend today, her name's Anastasia. She's an Inu. We haven't seen each other in like, forever. But we always come to the Moondance Festival, it's like our thing you know. I'm so excited to see her, she's like the nicest, prettiest Inu I've ever met! We're super close, like glue. I don't think anyone has a bond as close as me as Ana. Ugh, I've missed her so, so, so, so much. I wonder if she's here yet, she'll probably be here soon. Oh my gosh, haha! I just remembered the funniest memories of us, so it was three years..."

As Yasmina prattled away, so caught up in the retelling of her own story that she hadn't even realised that the random Avian guy she had been nattering to had already sidled off, bored of the Neko's rambling. She was as evident by her behaviour, extremely excited by the reunion of herself and her bestie. So much so that she would continue to talk for several more minutes before realising that the guy was gone. Pouting childishly as she realised the occurrence of her abandonment, "Wow, how rude." She scoffed, before crouching down over the grilling pit where her mackerel kebab was crisping up nicely. Plucking the treat up by the wooden skewer's end, she would reach over to a nearby condiment table, grabbing a garlic saucepot. With unnecessary excess, she would drizzle the sauce all offer the fish before throwing the pot into a bin and biting down on her snack.

"Haaa. Haaaaa. Hot! Hot! Hoo..." Still despite the heat of the freshly cooked fish searing her tongue, she would allow the meat to dance on her tongue until she was able to swallow the bite down. Sighing loudly, she would lick her lips, missing the smeared cream sauce coating the entirety of her upper lip and chin. After which she would look around once more, taking in the sights. It really was an incredible event, everyone was so lively and full of spirit. Good food, dancing, parade floats, and fun with just her and her best friend. Yasmina couldn't imagine anything ruining today. Re: Moondance in Miriad [Event]

"You're gonna love Yasmina, I just know it, Arq. She'll be great for our pack!" Anastasia chattered excitedly, swinging her pale hand in the darker one between them like they hadn't only known each other for a few weeks now. She led her neko man, who called himself her husband, through the oddly empty streets of Miriad, except it didn't seem odd to the white-haired Inu. Aside from the yearly trip to the Anthro capital to meet up with her friend, she'd never been to the city on a normal day. The wide street they walked was the only one she knew, and it took them right to the cliffside where they could take an easy path down to the beach.

The whole town plus some were crowding the extended sands sporting swimwear and body paint. Waters that normally beat up on the few piers and against the cliffs were just a line of pulsing ink in the silvery distance. They'd missed the parade, but the floats were placed at random as thematic decor. Giant white bunny heads made of lilies (and probably other colors of flowers she couldn't discern) had beautiful Lapin women spinning around them. In fact, various dance groups were in full swing around fires packed with mouthwatering foods. The landscape was beautiful and lively and the one thing that Ana looked forward to as a break from her pre-Sharqkan life, though that was mostly due to getting to see Yasmina.

Using any excuse to wear as little clothes as possible (as if she needed a reason at all), the Inu sported a tiny white bikini with a bit of sheer fabric hanging from silver rings on her upper arms, totally in the interest of flair for dancing. While she'd yet to have her body painted on with all the presumably pretty colors, seeing it on all the other festive folk had her hoping she could do it once they arrived. Maybe Arq and Yas could come up with pretty designs?

Speaking of Yas, Ana had yet to slow down or get distracted by any of the activities. Bright and shiny in the front of her brain was finding her dear friend, and since it was her job to find people in places as unforgiving as the Ventamir Tundra, it didn't take her long at all to sniff out the neko munching on garlicky fish near one of the pits. "YAAAASMIIIINAAAAA!" she screamed, breaking from her lover's hand to run toward the golden girl, arms raised and waving in anticipation of hugs and more screaming. "Happy Moondance!"  Anastasia squealed, throwing her arms around Yasmina to go in for a pleased nuzzle.

"Sharqkan, come here! You guys have to meet!"