A Night on Black Sands [Event]

A Night on Black Sands [Event]

Beg me for mercy , admit you were toxic , you poisoned me just for
another dollar in your pocket. Now I am the violence, I am the sickness.
Lilith

The venture through the mainlands had been quite a precarious one, between hooking up with that one hottie in Engloria, to being chased through the streets of Lyndon Port by some unsavoury thugs. Needless to say, Lilith was glad to be home, and after a few weeks of life as normal - normal being topless dances and blurry sunrises, it seemed she was free for an evening. Barnabus, her eldritch demon of a boss, had given everyone the night off to celebrate the coming holiday. Apparently, the beastie was kind of a fan of the night of the tide thief, evening throwing an optional work do for the girls.

Lilith had trekked along to the Sinhaven shoreline with her co-workers, but after seeing Miranda spew up all over her thigh-highs and watch Nikki drape herself over Barnabus in hopes of earning herself some 'special overtime' - the hybrid stripper decided she'd had enough. Abandoning the work party and strolling so far along the beach that she could no longer hear their eccentric cackling and wild antics. If there were anything strippers knew how to do, besides stripping, it was how to party - that and how to handle over a newbie trying to swoop on tips. That shit just didn't fly.

But whilst Lilith was always up for a night of intoxication and nefarious activity, she just wasn't in the mood to hang out with her work lot. She saw them every day, every draining void damn day. And so, she strolled throughout the festival, fortunately, there were enough people stealing in on the human's tradition tonight that getting herself lost in the crowd was an easy feat. Trekking along the black sands, a pink coat draped over her unsuitably white swimsuit. Her sandals dangled from her hand, allowing her bare toes to sink into the pretty black sand of Sinhaven's exposed shores. She made her way over to the bonfire, eyes scanning the area for a fresh source of liquor to whet her appetite. "Ugh, who do I have to sully for a shot." She groaned to herself irritably. 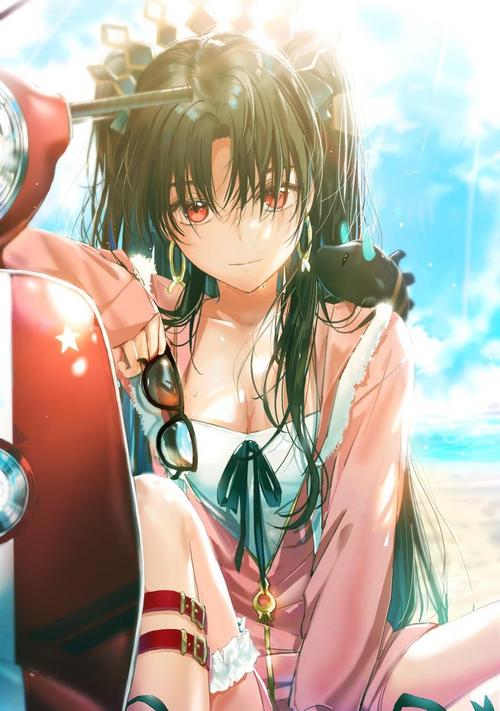 Shane was never one to turn down a party, especially one that boasted an entire night of alcohol, fireworks, dancing and every other form of partying that he could imagine. He was right in the middle of an incredible serious mission, to hunt down the group of Eldritch mercenaries that taken part in the assault on his family along under the command of the Lumigar Clan patriarch. He had no leads on the man and his two sons, and currently hunting down this thread was the only choice he had left to continue following up. It was partly for revenge, for the dead family and staff left behind by the group of four Eldritch mercenaries, and also to stop the insane Lumigar patriarch from carrying out his equally insane plans.

However, the Draconyte knew when to take a break. His transformation magic had been improved,  allowing him to infiltrate Sinhaven. He had left his Draconyte features visible to all, his horns and tail, but he masked his scent. For anyone that scrutinized they would find it odd, for instead of smelling like an Eldritch, Shane was entirely void of any scent. So far, he hadn’t encountered any troubles but he had been careful all the time.

Tonight? It was an entirely different story. Tonight, he was hoping that with all the merriment going on, he would be able to move around unhindered, eager to experience what Sinhaven had to offer for Moondance. He was hoping that it would contrast the relatively tame and symbolic celebrations of Miriad.

Arriving at the beach where the party was being held, with groups and groups of people having the time of their lives all over, Shane found himself heading towards the huge bonfire that reached into the skies. It was a landmark for sure, and the Draconyte could sense that was where he needed to go. With a huge grin on his face, and a bottle of liquor of unknown origins and properties in hand, something he had snagged up from one of the many stalls selling a variety of them, Shane half walked and half danced with every single group of people he passed by.

He was wearing nothing except a pair of red Bermuda shorts and slippers, casually exposing his toned physique to the world. If this wasn’t the appropriate attire to the party, then he would probably have to go naked. He had kept his tail hidden, or he would have literally swept people off their feet with his erratic movements.

When he finally arrived at the bonfire, Shane grinned widely at the huge pyre. It was either his flame magic resonating with the roaring fire in front of him, or the alcohol had begun to get to him. Either way, he was in high spirits and he joined the group of people dancing around the fire.

And just as he was turning around while grooving, Shane found himself stunned, rooted to the ground while the other dancers just moved around him. Some gave him annoyed looks for being in the way while others just avoided him like a river flowing around a rock.

Shane couldn’t be bothered with all that. His eyes were completely stuck on a particular brunette, groaning as she moved closer to the fire.

For some reason, Shane felt a pang of familiarity to the girl but how could he not remember such a hottie?

Aesthetic:
<< Refer to the avatar

Cassidi was anything but a party person, although today was a bit of an exception. The day of the Moondance almost always elicited a child-like wonder within the white-haired hybrid. When she was a kid, she never really got to enjoy festivals or parties like this. In a way, she was making up for the time she lost as a child. Instead of scrounging around for vydergold and quests, she finally had the chance to take things easy occasionally. As she let out a deep sigh, the half-werewolf strolled along the shoreline, appreciating the beauty of the sparkling black sands and colorful bonfires.

Needless to say, Cassi would never humiliate herself by dancing around on her two left feet. However, she had absolutely no problem indulging in various kinds of food presented by the vendors. The werewolf already partook in a couple of blood sausages. Currently, she was eating a delicious grilled fish in her hand. While walking closer to the bonfire, her nose twitched a little as she picked up the scents of the people dancing around the pyre. Having a heightened sense of smell was both a blessing and a curse (as cliché as that sounds, it was pretty true). It was amazing whenever it came to tracking someone (or, in her case, enjoying the smells of tasty food being offered at the festival). Yet, it can sometimes be cumbersome to be bombarded with many scents.

Rather than joining in on the exuberant dancing, Cassidi remained on the sidelines as she people-watched. Calmly chewing on her cooked seafood, a person could see that the white-haired woman sported on a loose cropped white shirt, black board shorts, and a pair of simple flip-flops. While she observed the bonfire, Cassi hummed along with the lively music, relishing the food and the high-spirited atmosphere. 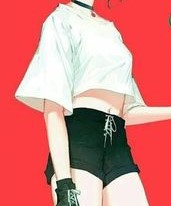 "I got sand in my voidcursed shoes," swore a foul-tempered male voice from the crowd nearby. Was he wearing sandals? No. Beachwear of any type? Where you high? Sage would rather be dead than be caught without a shirt on. He was one of the few dressed fully, though not in his usual ornate, big-hat garb. Instead he was trying to look like he didn't care, his top half being swallowed by an oversized gray shirt and black hoodie left unzipped. For whatever reason, the young man favored little shorts that stretched just above the knee, leaving a small patch of pale leg skin visible before black kneesocks took up the slack and ran into black sneakers. A studded choker, necklaces, a dangly earring, and rings finished off whatever this look was he was going for. It'd been a long time since he dressed 'normally', and tonight seemed as good a night as ever for it.

Even if it wasn't really his scene, he was a witch. And it was encoded into witch DNA to love a good party, and his DNA was very witchy. He was part of a legacy, even if his old man was the literal worst. Legendary Gwydion witch blood pulsed through his veins! Who was he to say no to the draw? Sage had surely earned it. It was dark, a lot of food was free-- especially if you caught it yourself-- and he was already here. Maybe it'd be good for business. Drunk people were terrible with vigs, and horny to boot. The thought had him rubbing his hands together as he weaved through the gross, half-naked peasants without letting them touch him, though the thoughtless action very nearly costed him his catch.

On a string slung over his shoulder was a decent sized striped fish with glowing red eyes, spikes pulsating as it slowly died. He wasn't the best fisher, but it was free and the heart inside its slippery meat was an ingredient for a potion he'd be making shortly. But first, he needed to cook and eat it, and the bonfire seemed the perfect place to get a nice char. As his hands fumbled with the string, he came upon some tanned chick in a white shirt and black shorts in his trajectory. "Watch it!" he snapped, the fish swinging around and probably slapping her if she didn't move. Even if it did, he didn't stop.

Sage marched straight to the pyre, snooping around for an unburnt piece of kindling to use as a roasting stick. Wasting no time skewering his dinner, shrewd blue eyes peered around at those close to him. Some blond, drunk himbo and... "You," he said, squinting at the brunette he was standing closest to. Normally he wouldn't have bothered to speak, but something nagged the back of his brain. "You don't look like the kind of company I keep. Why do you look familiar?" he asked, giving her a once over with mild disgust. Perhaps he'd sold her a potion to ward off a contracted case of Nethermange? A love potion? No, this seemed more than just a random customer... 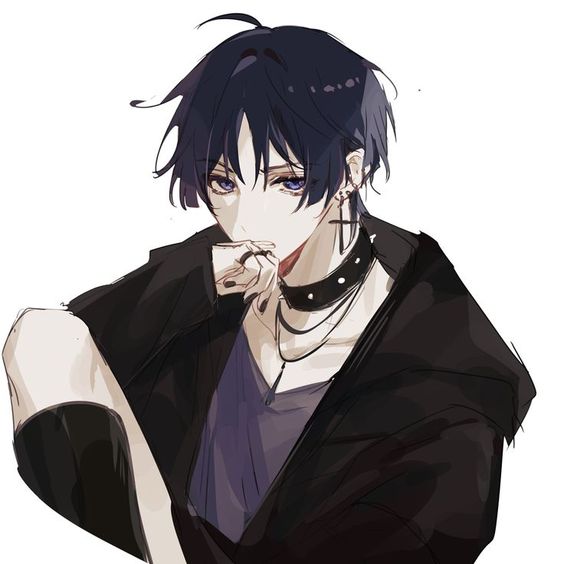