Maaaaaaaaan, when one’s heart was full of excitement, it made time run soooooooooooo slow… Daiko was still on the large ship, having sailed off the port of Miriad from a journey across the middle of the land of Vyldermir – at least from the contents of this map that he held in his hands, accompanied by Coda scanning the old paper with her sharp, aquila eyes. They were finally on their way to the island harboring most of the Otherworlders arriving in Mirinah… the island said to harbor inventions, buildings, projects and constructions for all purposes of material, architecture and fore-thinking not seen anywhere else in, perhaps, all of Vyldermir. He could… he could barely see the island from the ship as he leaned over the metal fence, trying to zoom in as far as possible with whatever avian strength he still carried in his body. The closer the island came, the clearer the tall buildings came to view, cutting through the clouds above… oh my God…

It was a cultural shock to arrive in Vyldermir, and it was a cultural shock to get used to the demographics and way of living in Mirinah. Now, another cultural shock electrocuted his flesh and bones from watching the steel pillars of ridiculous heights and sizes, the floating blob thingies in the air, and… oh man, even from the boat, he could see waves of light. Light, somehow, enveloped Rivengate from afar, and yet upon approaching… the light revealed grey quarters and stone floor.

And now, he was left on his own… it took a while, honestly, to get through long lines of some kind of ‘scanning’ process, but once he was set free, he ran straight out of the sentient doors and looked around. And what the hell, what a view… were those signs moving too?! Maybe they were huge smart plates like the one Daiko had gotten back in- oh wait, thumbs weren’t big enough for the glass panels up there. Everything looked so clean, though! It couldn’t possibly have been the results of manual cleaning labor, for all the walls looked so bright, so clean and… just so sharp. Coda was hanging onto Daiko’s shoulders tightly with her talons, a bit uncomfortable to the closing in on the air above by the taller buildings, but Daiko’s eyes were shining pure white.

However, the sparks faded when he saw the darkening clouds. There was something wrong when he looked further away, but he had been walking for quite a while now. Frankly, he was now lost – oh shit, yeah, he was lost! Lost and confused, that was only a matter of time, really…

“W-What?! There’s a fire nearb- wait… where’s the fire coming from?!?!?!” he panicked before doing what he felt most impulse to him at the moment – get a higher point of view and locate the fire… but daaaaaaaaaaaaaaamn, it was difficult climbing up the wall. It even drew some eyes to him as it was an unusual thing to see a person scape the walls like a human spider, but Daiko was trying his best to keep his fingers hooked on the spaces between the br- oops, there he fell.

Safe to say, everyone was looking weirdly at him now, while he walked down the street in a look of shame and sadness. His back had healed, but… he was flailing a lot, due to the itching and pain during the healing process. And what was with that stench up in the air?! And where the hell was he?!??!?!? 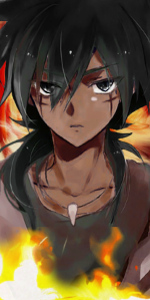