Latest topics
» Invitations [Cassian]
by Beaux Today at 4:33 am

The soft creaking of cartwheels resonating around the troupe was almost rhythmical in comparison to the hushed whispering she could hear from the people several feet before her. One of the sole things the white-haired Otherworlder had been focused on since they’d left the last town. Not that she was expecting to be involved in their conversation or anything, she was an outsider after all, but their whispering only made it all the more obvious who they were talking about. She huffed softly, leaning back against the cart. She couldn’t blame them after the last incident however… not having encountered any problems on their travels until the moment a stranger asked to travel along with the caravan until the next town over? Yes, even she herself would’ve been doubtful of the coincidence. And with Hoptus Forest bordering on the horizon, cautiousness wasn’t exactly an uncalled luxury.

If there had been any other ways Kyrenai would’ve gladly opted for traveling alone, but sadly, with her magic gone and her fighting skills far too rusty to depend upon -let alone her having a weapon to utilise said skillset with- she was left with little other choice but to ask traveling merchants for help. That they suddenly encountered issues where none had been before was nothing more than an unlucky setback, yet her previous travels had never given her this much trouble; that was the only reason she had been stubbornly sticking around. There was this gut feeling telling her there was more to it. What however, she couldn’t quite say.

A high-pitched whistle pulled her out of her thoughts, its melody repeated and echoing away further down the line. It was a signal for the group of merchants to stop their travels and start making up camp. Early to some, with the genuine size of the current troupe they needed the hours of daylight left to properly move everyone and make the necessary preparations to get through the night. She was quite sure that with the vicinity of a monster-filled Hoptus Forest they’d want to move past it in a single trek at the break of dawn, rather than chance upon doing it overnight. The demon-turned-mortal saw no fault in their reasoning, and nodded as the handler of the wagon she’d been tagging along with gestured for her to get off. It would be the usual drill once more. While the carts got in a defendable position she’d be off gathering firewood and flint with the other travellers tagging along. And chancing upon their current behavior, the Otherworlder might be better off doing so alone… just to be sure. She could honestly do without their judging looks.

With her aim set on a nearby gathering of thicket, Kyrenai sauntered off to make herself useful.

Izou woke up with a start, his head jerking upwards. The very movement gave him a terrible headache that threatened to put him out again, but the swordsman gritted his teeth and held on. His left hand flew to the side of his waist, and visibly let out a sigh of relief. His most prized possession that he had on him was still there. His katana. However, what he found with his right hand, fingertips pressed to his forehead, troubled him. The source of the throbbing pain on his forehead was wet and sticky to the touch.

Izou rolled his eyes as he moved his hand away and took a look at his fingertips just to visually confirm it. His fingers were stained with his blood, and from the consistency of it, he guessed that he had been out cold for a few hours. Taking a look around him and then up at the sky, it was already dusk.

“That damned demon,” Izou quietly cursed beneath his breath as he fumbled all around himself, and satisfactorily smiling when he touched a small rectangle box in one of his pockets.

A few seconds later, a cigarette hung from Izou’s mouth as he pushed himself off the ground. A few swipes cleared off the leaves and dirt on his body and the young man began to survey his surroundings once more. He had ventured into the edges of Hoptus Forest in pursuit of a demon that had been robbing and murdering passing merchants. Their fight had been a fierce one, but the end result was clear.

Izou remembered he had been taking the upper hand in the fight, landing several hits that couldn’t be ignored but at the last minute, the demon had demonstrated a sudden surge of strength and overwhelmed him with a powerful attack to the head. He didn’t know why the demon had let him live, but Izou wasn’t going to complain about that.

“I failed the quest, I guess,” Izou mumbled to himself as he groaned over the loss of the rewards for the quest.

Walking in the general direction of the main road, Izou was on his third cigarette when he had no choice but to push through a rather huge thicket that was in his way. Not feeling up to the task of finding a detour, the swordsman chose the other option. To slash through it. Bafflingly, this was actually going to require more physical strength from him than just walking around.

Unsheathing his blade from the sheath in a fluid motion, Izou held the blade to the side, lightning crackling along the entire weapon before swinging it horizontally across his front. The lighting around the blade condensed and surged forward in the form of a wave of lightning, decimating the thicket in an extremely chaotic and messy way. 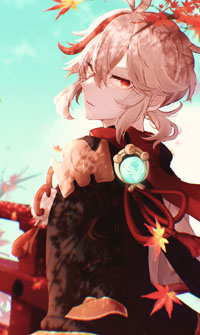 The bushes she'd aimed for at first proved to have little branches to spare for a proper fire; at least not without her actually ridding the plants and smaller trees nestled within of their limbs. Something she wouldn't do; the wood would be ill-fitted to start a fire, let alone keep it going, and most importantly- it would upset the balance of nature. If she just searched a little bit further she'd find dried wood and fallen branches easily. Although it did mean she'd have to get farther away from the traveling group and closer to the forest in question... well, as long as she stuck to the outskirts all should be fine, right?

Luck was on her side as Kyrenai wandered between the first few rows of trees, still able to see the people and their carts if she turned to look behind her. If anything were to go wrong, she'd just have to turn and run as if her life depended on it. Which it probably would if running away was in order. The gentle rustling of leaves as a soft breeze picked up between the thicket and trees kept her on edge, every sound foreign to her. For some reason, despite it 'just' being the lesser-grown part of Hoptus forest, the white-haired woman felt awfully uneasy, nearly jolting at every occassion. She grimaced. To think even something as stupid as a breaking twig would cause her such worry... she was truly growing weak in this mortal form.

Clicking her tongue, Kyrenai tried to snap out of it and kneeled in front of a mass of shrubbery. Large branches from the nearby trees and thorny vines made up the most of it, while a handful of smaller plants made the wall of thicket nigh-impossible to penetrate. She couldn't even peer through it to see what was hiding on the other side, but! At the very least these had what she needed... and berries, to boot! It'd be a nice addition to the meager meals- not that she complained, anything was better than an empty stomach, but having something sweet for dessert always was a welcome change.

As she started pocketing the berries a shrill sound made her perk up, instincts rearing to attention at the unknown danger coming her way. Something seemed to be making its way through the thicket, yet before she could properly focus on where exactly the sound was coming from the entire bush seemed to explode as lightning tore through it. Kyrenai yelped, dropping herself to the ground to dodge the wave that blasted inches over her head, and covering her face with her arms as leftover sticks and leaves rained down around her. After a moment of silence she dared peek from her self-made cover, only to see the entire thicket obliberated, and a young man standing on the other side, sword in hand. The young woman cursed. "A-are you out of your damn mind?! You could've hit me! Or anyone else for that matter!" she exclaimed, getting back on her feet and trying to pry a rogue branch that had gotten stuck out of her hair.

The wave of lightning ripped the thicket apart with ease, creating an explosion of leaves, branches, twigs in front of him, clearing the way for him forward. What Izou hadn’t expected was a sudden yelp from the other side of the thicket, causing his eyes to widen slightly. As the destruction settled down, charred leaves and broken branches littering the forest floor, Izou caught sight of the one behind the yelp.

The first thing he noticed was the white hair, which currently had a branch stuck in it. The white-haired fellow turned out to be a young woman, an angry one as she started to curse at Izou. It was understandable though. Izou had been irresponsible with his weapon, almost endangering another person with a callous display of magic. He should apologize and make amendments to the girl.

“How was I to know what you were doing behind that thick bush? Why were you even there in the first place?”

Izou looked at the girl with a lazy expression on his face. Izou brought the cigarette to his lips, clamped down on it to free his right hand and sheathed the katana and fasten the sheath so that his katana now hung by his waist. All this was done while he kept his gaze trained on the girl, mouth opening slightly at the side to exhale cigarette smoke.

However, his eyes suddenly caught sight of movement in the direction behind the girl and he cocked his head slightly to the right to get a clearer view.

‘A group of travelling merchants?’ was what the swordsman thought. Something gleamed in his eyes as he got an idea and immediately, he switched back his attention to the girl.

“Are you with them?” Izou asked, nudging his head to the direction behind her.