History:
Elliott grew up with a loving family in Lyndon Port, and lived a peaceful life until the day she was eighteen years old. That was the day her life changed forever.

The day started out warm, the weather dipping into the cooler temperatures once the sun began disappearing beneath the horizon. With a roaring fire, good drinks and even better friends, it would be perfect. This particular early spring day was her eighteenth birthday. Elliott had plans. Big plans!

The sun hung at half past four. The shadows touching only the loneliest of nooks and crannies. The ones that resulted in mountains swallowing the light before time. One girl had been born ready for this. Her crimson hair reflected the color that creeps in with the setting sun. Those darkened locks that still glitter with light. They had been meticulously pulled and pinned into an elegant braid behind her ears with two strands framing her cheekbones. The gold that glinted from her hair perfectly highlighted her chocolate eyes and shimmered along with the gloss on her lips. She smacked her lips once, winked at her reflection and decided this was it.

Elliott's boyfriend was waiting for her at the end of the road. He had a bouquet of sunflowers in his hands and extended the free one toward her. "Happy birthday!" Planting a soft kiss on her cheek, they strolled to the clearing where the party would take place. A few felled logs were arranged around quite a large fire pit. A bucket of ice with alcoholic beverages sat nearby, and Elliot's closest friends had already gathered. A raucous "HAPPY BIRTHDAY!!!" echoed through the clearing. Some were already buzzed and enjoying themselves. "Let's get this party started!" She shouted back. Someone handed her a cluster of kindling and she lit the wood on fire and threw it in the pit. The fire surged to life among shouts and sounds of awe. Elliot cracked herself a beer, chugged the first one and cracked another before settling in next to the warmth.

At some point, when the moon shone bright in the sky and more beer than she remembered drinking causing her vision to blur, Elliot found herself wandering home alone. The vague memory of her giving up her womanhood made her heart hurt. She held the still cold beer to her forehead and stared at the moon. Blood, sin, and regret caused tears to stream down her cheeks. She doubted she'd see her boyfriend any time soon. If she did, it would be painful for her. Amidst the anger now welling up inside her, Elliott had missed the howls that sounded a little too close. She hadn't even noticed that a lone wolf had been watching her from the tree line.

Blood poured from her left shoulder while the moon seemed to blink with her fading consciousness. 'Is this it?' She thought. That one lone wolf was long gone now.

While still haunted by the memories of that night, Elliott has taken her transformation as a sign of new life. She now lives in Sinhaven and disappears one night a month. The night the full moon shows its face.

Key Fear/Adversary: What do they fear, alternately what works against them?

Overall Appearance: (Please either input 100 words description on your character's appearance or put an image in a spoiler) 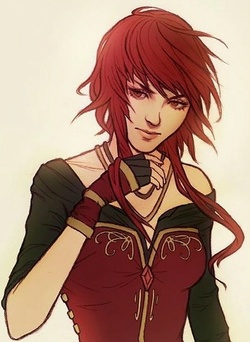