As Hibiki ventured through the Hoptus Forest, a name of which he was blissfully unaware, he encountered absolutely nothing remarkable. That, in and of itself, was worthy of note. He had heard the occasional sound of nature, but not spied even a single other living being. Though he walked for quite some time, he had no further encounters within the trees. Part of him considered that bad luck, but it wasn’t all that bad.

There were quite a few things he had going for him. First, he was at least alive and well. He’d sustained no injuries nor expended any noteworthy amount of effort in the last battle against the Hollow that had trapped him here. Second, he had his Zanpakuto with him since he had been in the midst of a fight. Though unusual by Shinigami standards, the cloth wrapped around his right hand was a familiar sight. With that very extension of his soul at his side, his chance of death was pretty low.

Oh, and he was still hot, so there was that. For once in his life, Hibiki had actually been in his uniform. Vanity aside, if wherever he was was even vaguely aware of Shinigami, then his uniform would be recognizable right away. The black Shihakusho resembled little more than what most people would think of as a kimono, but it was tailored in a way designed more for combat. More distinctive was the white haori draped over it. This loose, knee-length jacket fluttered in the wind and bore the insignia of the Captain of the Fourth Squad of the Thirteen Court Guard Squads, the Gotei 13: a black diamond outlined the kanji for four, 四, in the center. If he encountered anyone that knew what a Shinigami was, this outfit was a dead giveaway.

Dressed as such, the blonde emerged from the forest at long last and had another slice of good fortune befall him. He’d managed to wind up in a spot that had a road within eyesight. Though the journey took him far longer than he felt like it should, he made his way to the road and walked along it, wherever it might take him. The road was a good sign. It meant there was civilization here. That was the first thought he had, but it was tempered as he encountered nary a single soul on that road for quite some time.

After quite a journey Hibiki found himself at a literal crossroads. The rumbling of wagon wheels slowly filled his ears, and that could mean only one thing. A person! Well, someone who understood what a wheel was at least. Who knew if “people” existed in this realm. Rather recklessly, the Shinigami decided to approach the sound and called out in that direction.

“Oi, I seem to be a bit lost. Can you point me towards civilization?” 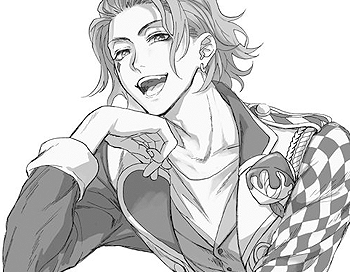 TAKE ME TO WONDERLAND----

Not far from the forest, on a colorful carriage, sat a very pretty man.  He was gilded all over with sprightly  palettes of black, crimson, gold and  white, for eyes he had the palest sapphires, and shoulder length hair that was as luminescent as a bonfire. The lad was humming humorously as his voice trembled in his throat, the ride a boring, semi-bumpy one.

The moving carriage (more of a hybrid) was decorated in rich colors befitting the circus with all the ornateness seen in the traditional bandwagons of old, and yet every painting was not without meaning, for  behind each embellished figure and design there was a touching  story to be told if anyone cared deeply enough to listen, including the two performers that looked suspiciously like his parents. He was pleased with his independence, but he did miss both his mother and father when times were unkind and rough on this young, unsuccessful entrepreneur of fashion. His incredible positivity, however, was his bread and butter that kept him fed through the many sleepless nights of worry. On his own for so many years now, there was no going back!

There was a voice in the distance now, one that almost made Pomme believe he had either succumbed to the heat of the sun or lost his battle to boredom. He was never quite good at being still, to be so stationary for such a long period of time that he could only do minimal things like steady the reins and monitor the well-being of his horse, a massive, chestnut-brown coated beast with a love for carrots.

“Halt, Bonbon!” exclaimed Pomme with a grin, casting his eyes over the powerful-looking fellow that called for his attention. The hefty stallion neighed and tossed his great mane about.

“Good sir, my newest guest, or future friend to be, call me Aubrey. But accept my sincerest apologies going forward with my being so blunt with you. We aren’t close enough for that sort of honesty, but I seriously cannot help myself. What, pray tell, are you doing out here? I see you’ve got nothing but the clothes on your back! You aren’t even properly equipped for travel. For me to point you in the direction of civilization is like giving you the death penalty. It is such a long road. At least you’re fashionable.” Aubrey must have forgotten to breathe as he ran off with his words and never stopped once until he thought of a less-than-brilliant idea — why not simply invite him?

“I do not have kittens, puppies or candies in the carriage,” he said, unable to hide the humor in his voice, “so you can take a chance and hitch a ride with a questionable stranger like me, or you can be on your merry way. There is no telling when a wyvern may show up and pick you from its teeth! Your name, please?” The young man was cheerful; still, he still wouldn’t come down from his seat to meet him. Well the carriage stopped for him at least. That was one more piece of good luck for Hibiki. It was, however, quite painfully clear just how reckless his actions had been. With each word that reached his ears Hibiki found one more way that he had miscalculated. The initial introduction, eccentric though it was, didn’t bother Hibiki in the slightest. No, it merely reminded him of someone else with that much chaotic energy.

The problems began with the first question. What was he doing out here? Such an easy question in theory, if he had any way to answer that. Can’t exactly tell a random person that you were chasing a monster, killed it, but got stuck in what you think is a different dimension now could you? Thankfully, he was given a moment to consider his answer as the other man hadn’t waited for an answer, or even a breath, before he continued on.

Indeed, Hibiki had nothing on him but his clothes. Well, he had his Zanpakuto, so he wasn’t particularly worried, but ideas like “being prepared for travel” didn’t really apply when you could just open a portal back to your house, now did it? Besides, as a Shinigami he didn’t really need to worry about things like food or water. Yeah, he could eat and drink, but he didn’t rely on such things for sustenance so long as the energy of his soul still filled his body.

No, the problem here was that he stood out like a sore thumb. Clearly there was an expectation about how travellers should look and he didn’t even come close to fitting the bill in that regard. Quite the opposite really. He looked out of place entirely, and that by itself could lead to plenty of issues. Thankfully his mysterious benefactor, Aubrey, did not seem overly concerned about whether Hibiki was a threat or not. He wasn’t, but the Captain made a mental note about the lack of self-preservation on display. Either Aubrey was either a kind soul, a fool, or strong enough to have no fear of death. Hard to tell sometimes.

Aubrey’s offer was accepted, of course, but not before a flash of concern showed on Hibiki’s face. The mention of a wyvern was what caught his attention. He’d heard tales from the east branch about the dragons, but never seen one before, and wasn’t entirely convinced they were real. Was he somewhere where such creatures were commonplace? That was very troubling. It appeared that wherever he was, there were threats more than mere Hollows to worry about.

After quite a bit of silence, Hibiki offered a deep bow to the man before him. His tone far more formal than before, he offered his name as he prostrated himself. “Kamikawa Hibiki, at your service Aubrey.” He rose from his bow and locked his eyes on Aubrey’s own. A warm smile blessed his glossed lips. “I look forward to your company on this journey.”

Without any explicit invitation, Hibiki hopped up to the seat beside Aubrey and made himself at home. “The least I can do is offer the answers you’ve sought in exchange for the assistance.” Crap. Why did he say that? Because he had nothing else to offer in exchange for the safe passage. Lying is bad. The truth is bad. What should he answer with? Just enough information, that’s what. “To tell you the truth, I haven’t got the faintest clue what I’m doing out here, but I expect you’ve already gathered that.” If he was lucky, he could play that off as amnesia.

Maybe, just maybe, he could dance on the razor’s edge long enough to both tell the truth and not reveal who he was. His uniform hadn’t been recognized, so it seemed that he was in a world that didn’t recognize Shinigami… but Aubrey had seen him without any issue. Had he been turned human? Did that portal have effects similar, yet opposite, to the portal that let humans come to the afterlife? There were a myriad of questions on his mind, but he knew so little that even a question might give him away. Only one approach seemed to hold merit.

“Beyond my name and lack of planning for how I’ve gotten myself out here, are there any other curiosities of yours I might satiate?