Creature of Olde and the Regular Old Creature

Creature of Olde and the Regular Old Creature

Over the past several days, Soot had tried to earn money in quite a few different ways. Most of which involved scamming or stealing and all of which ended in complete and utter failure. She wasn't subtle enough to consistently get away with theft and her lies seemed to err on the side of quantity over quality. It seemed she had no choice but to fall back on her very last option, earning it.

She ended up back at the guild browsing postings like old times. Unfortunately, it wasn't quite the same anymore, she hated to admit it but she probably should've been taking on easier quests now. That being said, one quest seemed to come with a hefty reward for simply returning a dinky sword to someone. The location and reasoning for that sword being lost in the first place were a little concerning but she could probably just hire someone else along the way and give them a share of the reward for keeping her alive until she got it.

Feeling a little too proud of herself, Soot began her journey to Viridia Overlook. She made sure to take the paths most travelled and every time she passed an adventurer, she'd make an offer she figured nobody would refuse. She started offering 10% of the reward, but after a dozen or so people declining she raised it to 15%. This pattern seemed to continue for a while, with Soot eventually offering the absolute best she could, 28 and a half%. She even shifted to her human form after a few reasons for declining being linked to her being Eldritch. Yet, despite all of her efforts, she failed to get anyone to bite.

It was beginning to look as if she'd be doing the quest herself after all. Not that it was a problem, she'd handled far worse before and it would really just mean more reward for her. For all she knew, she might not run into any danger anyway, after all she was just playing lost and found.
341 Words   @Jen 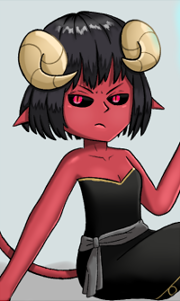 Re: Creature of Olde and the Regular Old Creature

Helena was starting to have doubts. She was alone, she was bored, and she was running out of money. After several weeks of being on the road alone since leaving the temple she had called home for her whole life, the youngest moon guardian was starting to wonder if this life of adventuring was as exciting as her sister Jen had made it sound before she had set out on her own journey. She’d hardly had anything exciting happen beyond the initial arrival to the mainland from Ilyanor. To an adrenaline junkie, that was nearly equivalent to being forced to watch paint dry.

Even though she’d applied to join the Adventurer’s Guild, Helena hadn’t had any success finding quests to do. She’d been desperate to find something to do besides walking, but the people along the southwest coast of Mirinah seemed not to need any help.

The white-haired young woman kicked another rock and let out an exaggerated sigh. In the distance, she noticed someone else walking towards her. It wasn’t uncommon to pass other travelers on the road, but to the talkative Gaiyan, they had all seemed unfriendly. She just didn’t understand why they didn’t want to stop and trade stories or chat. At this point, she’d become jaded enough to just wave politely and keep walking.

Helena didn’t pay much mind to the person she now passed. With a friendly wave and a half smile, she let out another sigh and kicked another rock, continuing along the road towards Viridia Overlook. At least there her boredom would be lifted momentarily by ocean views.
Post WC: 256 ❂ Thread WC: XXX/XXX ❂ Tagged:  @Soot   ❂ Music: -