» The Spirit of Wysteria Manor
by Bahadur Today at 9:18 am

» Statsheet Creation : Requests & Updates
by Iris Today at 7:58 am

Supernova in her Stare | OPEN

Supernova in her Stare | OPEN

Not a day passes in Tilbur Village without what might as well be modern folklore which describe a wispy appearance at nightfall that would grow into a blaze, and then dissipate as quickly as it had emerged. Many theories are spun, and many quickly shut down as nonsensical, yet none can escape the truth of the presence of a blaze in recent times. Ashen remains hold true. The source, however, is as cryptic as its tale.

There in the darkness sits a lone angel, eyes toward the moon, the crimson red gaze threathening to combust the very air she breathed from her lips. Had a curious ear open towards her, her lamentations would be made audible. Her struggle to remain true and pure made her often added to the weight of her guilt and all she had to offer was repentance to whoever would accept them. Yet, the angel was unsatisfied. Every transgressor she would strike carried the heft of their sins onto her, for in the taking of life had she committed a sin of her own. Still she continued with the knowledge that there would be no peace without chaos, no creation without ruin.

Despite her conviction something pained in her for resolution, the fact that she could very well become a transgressor herself. It was here her pain truly resounded: where the line between transgressor and unfortunate soul blurred, where it overlapped and crossed. The very thing she was bent on erasing was once a being of purity too. What then? Her heart ached with pity and torment, as if to spite her empty gaze. Repentance, then, should be made to her victims, yet no method of apology could she muster to truly be adequate. So she mourned in silence, as the moon hung in the clear sky and the stars twinkle off the space in her eyes. 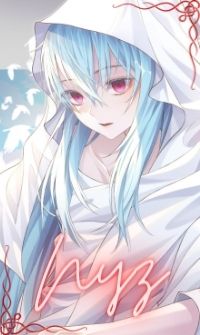 And so it came to be that an ever so cursed being heard the lamentations in her sigh, beholding the silhouette drawn against the pale moonlit sky with curious eyes. There was something she could not quite put her finger on, but whomever she was beholding held a certain grace she could not say she'd ever seen with any other person she encountered thus far. Not in this world nor the previous, nor the one she truly hailed from. And that caught her attention in full, just watching from a distance as not to disturb, yet somehow every sigh she uttered reached her without any interruption. Drew her closer to intrude upon the solemn sight of this individual. Even though being here at this time had never been her true intention, with the former demoness' curiosity piqued she could not turn back. Her instincts just didn't let her.

Even though she'd only arrived in Tilbur Village to see for herself how grand the smithies were, how masterful their craftsmanship, and to perhaps arm her so she might travel by herself rather than to depend upon the grace and kindness of merchants or travelers alike. Swords, spears, jewelry and more, yet her funds were far less than the prices they offered, so she'd scavenge for the odd job to remain afloat. Rumours caught her fancy just like the stories they told, and fearful or in awe as some of the villagers might have been, Kyrenai found herself out at night, this very night, for that very reason. No drowsiness or fatigue to keep her to bed, instead an instinctive curiosity that called her to traverse the streets. Even if it was for naught, the nip in the air felt soothing, and the beauty of the stars and moon that graced the night sky made her midnight escapade all the more worth it. Only to come across the person in question.

And after contemplating even longer, watching, waiting, not willing to disturb, Kyrenai decided at last. She'd join the figure; and as she stepped forth from the shadows into the moonlight her pale hair seemed all the more luminous. A simple bow of the head, both in greeting and silent request to allow her to get closer, for she wished not to intrude if not wished as such. Speaking only this, though she knew not why.

"Even the solemn moon has the stars to keep it company in the dark night sky. May I do the same for you?"

For but a fraction of a second, the angel's right shoulder tensed, shifting what seemed to be a large claymore strapped to her back; her index and middle finger twitched, and there was a sudden flare in the cold night's air. A slow turn revealed a flawless poker face crimson with the shine of eyes that invited to be likened as fresh embers from flame. Wordlessly she examined the visitor, without as much as a silver of hesitation as her gaze traveled to her eyes. The female stood, and nodded back to return the greeting. She moved closer as if she was levitating in the air, the lightest of steps keeping her up against gravity more than it should. Only then would the visitor feel their surroundings heat up mildly as the angel spoke her first words to her.

"The stars can flicker in and out at will, where the moon is given the duty to orbit them."

There was no visible sign: no vindictiveness, no contempt, no hatred. The angel walked beside the stranger just out of arm's length, and made no other move than face the moon once more. A brief, tense silence filled the air before the angel let speech take over once more. "State your name, stranger. The reasons you face me here may well determine your fate."


In the span of the time she had allowed herself, the angel deduced the identities the foreigner beside her would be possible. An assassin hired to eliminate her, a challenger intending to toy with her, or a simple innocent for however long she might be. Her eyes brightened with what could only be described as a flare, and the space behind her back seemed to bend like watery ripples over the surface of a tempestuous sea. What the angel lacked in facial emotion she made up in body language, equally as clear; a blizzard to a snowstorm.


Yet in that same splinter her heart was set ablaze. Trepidation, anticipation, even hope was entangled within the folds of her mind as she turned to face the stranger with a sidelong gaze. Stars, again. They were volatile, unpredictable and undetermined outcomes. If she managed to do this right, this stranger would be stranger no more and the world would be a little less dark.


"Tell me then, with your blaze, why do you shine so?"

First the night had been chilled, keeping both the drowsiness at bay and her senses on alert, but the moment the person before her stood she recognised a litheness she’d describe to a woman. Crimson eyes shone upon a pale face, illuminated in the darkness and complementing the mysteriousness surrounding her. How she could’ve missed the giant claymore on her back however, Kyrenai had to guess, as was the sudden length of the female. At least their greeting appeared friendly in kind enough for Kyrenai to move closer as well, albeit only a few steps, beholding her until something chased the chill of the night away. There was warmth coming from the woman’s physique; not unbearable, but dare she say pleasant this late at night, while she spoke back in similar riddles.

Yet the white-haired one only nodded, watching as they joined her side to side, somewhat more than an arm’s length away from her, but still close enough to hold a proper conversation if needed. And as she faced the moon so did Kyrenai follow her example, letting the silence overtake her until her fellow star-gazing companion spoke anew.

“Kyrenai Artanis, oh young Stargazer.” she spoke solemnly, addressing the woman, while keeping her eyes trained on the lunar orbital in the sky. There was nothing betraying any worry in her form or voice, pure tranquility and ease fueling her being. Even if she were to be struck down here and now, she’d make peace with it. Her cares were elsewhere, as were her worries. Even when the angel showed her warning in more curious manners, rather than her face contorting so did the very fabric of space around her, yet all she got from the sealed demon in her mortal body was but a chuckle. A most pleasant smile settled upon her lips. ”If the stars could outshine the moon without losing their life, they would. But that would make the moon a most lonely beacon in the sky; don’t you think?”

Kyrenai turned her head, looking up at the woman inches away from floating and nodded softly, a soft breeze picking up. ”I try, Stargazer, but try as I might, my life has long since been burnt and what you see is but a shimmer of what it once was. What I hope to regain, soon enough.” Silently she stared at the hand she outstretched towards the sky, allowing a ripple of lightning to run past her skin; enough to illuminate her arm and hands, and to watch the lightning dance upon her fingertips before dying down again. Pure, white-hot lightning. Her eyes closed as the light faded away, the subtle orange shine in her eyes too fading with it. ”Tis all I can muster, my most pathetic shine.”

Her heart rate doubled at the subtle warning Kyrenai had given her, struggling to steel her will so that she wouldn't draw her blade hastily. Fortunately, she was distracted from that with Kyrenai's next words,  and as she watched her spark a wave of pity washed over the concern she had with the miniscule light she made. Slowly a gold light would emanate from the distorted space behind her back: it revealed wing-shaped forms that seemed to extend from her back and hide the claymore strapped behind her. She spoke slower this time, a voice that hinted at a gentler attempt, soothing to contrast itself with the alabaster stare she continued to give.

"A light barely flickering to be seen... What would have made you lose such a flare?"

The angel held a palm upwards and set it alight instantaneously, as if to warm Kyrenai further. The flame itself was a wonder of creation: it was of no single colour, being an iridescent light that altered it's colour to one of every spectrum imaginable, and then a little bit more. She walked slightly closer, not too much to put her at risk, but enough for the warmth to be of comfort. Quietly she looked at the moon in the sky and allowed a sigh. "It's said travelers often become playwrights of their own stories. I assume you have one to tell, Voyager?"

The nickname was one that had just sprang out of her mind, but it seemed apt enough considering the weary look on the stranger's face. She decided to wait a while for her to tell her tale and have a little glimpse into the stranger's mind.

"I hope I'm not asking too much of you, Voyager."