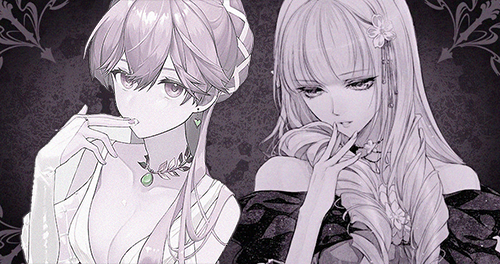 Adder's fork and blind-worm's sting, Lizard's leg and howlet's wing, For a charm of powerful trouble, Like a hell-broth boil and bubble.
Penelope & Noelle Ravenwood

As always, there was something especially sinister about the atmosphere of the Shambles Forest. Whether it was the army of dead trees currently statue-ing in the Shambles forest, with their dampened logs, and bare branches. Or the gloomy fog that hovered around each trunk with a malevolently opaque thickness, not permitting its inhabitants any view of the forest's horizon. Or whether it was the unnatural quiet, no scurrying of vermin or flapping of wings within miles. Whatever it could be pinned down to, something did not quite feel right with the Eldritch landscape. And whilst these unpleasant elements of the Shambles might have seemed unnerving to some, but to the eldest pair of Ravenwood sisters - there was a curious comfort to be taken from it. Blissful. Familiar.

The pair were currently situated outside of the forest's enchantments, so there was no visible evidence of their home. Just hordes of trees and gloomy darkness, stretching out for miles and miles. Working outside of the magical barrier was essential for the women as there were some things that could not be gathered in the confines of their communion.

Noelle, the youngest two sisters, was currently crouched on the grassy plains of the Shambles earth. A young woman with all the grace and softness of a rose, somehow she looked both out of place and completely at home in the creepy forest. Delicate fingers pulling up roots of some kind of flowered weed, mud smeared over the pale woman's hands and the front of her elegant black dress. It was a messy job. Far too filthy for the pink-eyed beauty knelt there, but not nearly as dirty as her older sister.

Unlike the younger Ravenwood, Penelope was covered not in earth but blood, dark unicorn blood to be precise. Currently perched on the slain hide of a dark mammal, red fluids coating her clothes, chin and arms as she delved inside the gaping hole carved into the creature's stomach. So soaked in blood that trying to determine the colour of her clothes prior was near impossible - glimpses of grey fabric peeking out in uncoated gaps. All the while, the weeds in her own basket were replaced with entrails and other organs.

She forced her arm further into the beast, an expression of concentration on her face as she felt her way up under its ribcage. Moments later there was a snap, followed by the soft squelching noises as her arm re-emerged from the creaturss corpse - its heart gripped firmly in her grasp.

“Perfect condition.” She mused, eying the organ before placing it carefully in her basket. Noelle looked up from where she knelt, eying her sister’s trophy with blank indifference.

“Blessed be,” She said softly, her voice empty and void of feeling. Penelope looked at her, honey eyes finding her sisters despite the darkness that shrouded them. “Blessed be.” She answered with equal reserve, before climbing off the beast. Scooping up the handle of a woven basket, she twirled the swish of her dress prevented by the dampened red fabric sticking to her ankles. “Let us return sister, we have more than enough for an effective hex.”

Plucking up one final weed, Noelle would rise to her feet. Basket in hand, its contents currently filled with Muegroot, writhing Syggle worms, and most recognisable to those not resident of the Shambles; dandelions. Penelope moved around the creature, kneeling down before it, her sister would wander over before kneeling beside her. The pair would close their eyes, remaining quiet for several moments. Silently giving thanks to Heknys for her blessing, and offering the beast's flesh back to the earth. Moments would pass, before the earth began to move, the ground beneath the creature would sink, lowering the dead dark unicorn into it. Its flesh would quick rotten, as though time accelerated on the beast's body alone.

Within less than a minute, any evidence that the creature had been slain was gone. Even the bloody leaves and stained earth had been swallowed. Penelope’s blood-drenched body being the only proof that it had ever existed. The girls would stand simultaneously, lifting their carry-ons, and they began to stroll through the trees. Neither spoke the entire walk back, such was the level of comfort between the pair. Moving almost in a synchronous manner, Penelope led and Noelle followed. If one gave a look, the other understood. There was no need for words. Not with a bond like theirs.

After an hour of wandering the girls would stop in what appeared to be a patch of forest just like the rest that they had been wandering through. Alas, it was not. Penelope would reach forward, utter words under her breath that would reflect an almost alien language. One unknown to many in Mirinah, an enchantment only known by a true witch. She would reach forward and drag her finger down through the air, as though unzipping a dress to reveal the bare skin underneath -  except this skin was a glimpse of colour and warmth. Bringing it all the way down, she and Noelle would step through the gap in the enchantment. Following which it would reseal behind them as though it was never there, to begin with. And to any that may have seen this from the other side, it would have appeared as though the girls faded into nothing, enveloped by fog only to reveal the empty space of the forest plains.

On the other side of the enchantment, however, in a place, only witches could see there was a vast transformation in the atmosphere. The sound of music reached their eyes, lively drums and the twanging of strings on instruments. The joviality raised by clapping and laughter that echoed through the now lit up forest. Almost like stepping into an alternate universe, the girls were now situated in what was known as the true Shambles Forest. A beautiful place lit up with the comfortable amber glow of lanterns and dancing fireflies. The tree's luscious and full of life, blossomed with an array of colourful foliage and magnificent flowers. The entire area was filled with beautiful decor, and trinkets as though the entire forest had been turned into one beautiful living space. High in the trees were houses - [EDIT AND EXPAND]

The scent of rotting trees and stale air was replaced with the succulent aroma of cooked meat, most likely a spit roast hog complimented with chargrilled vegetables. Penelope took a deep breath, sighing contently at being home. This was the reality of witches, the truth so few knew about. The gloomy eerie darkness that was their home, was nothing more than a mask, there were a number of ways to unveil it’s pocket realm, but only a true witch would genuinely know the method in discovering it. As it should be.

“Shae, Noelle. Welcome back! Fetch a good hall didja?” Came a voice nearby, the girls would look after the familiar wrinkled features of Maggie Poisker, a gracefully pretty elder passing by the north forest’s entrypoint with a tray of diced fruit. She would hold the tray toward the girls in offering, to which they would eat grab a hearty piece of dragonfruit.  “Thank you sister, and yes it was a splendid gathering,” Penelope replied, nibbling on the white delicacy.