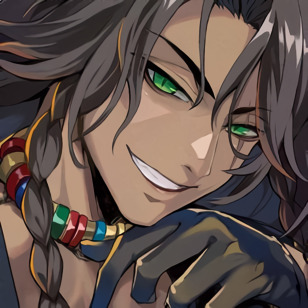 ☼  Hallowed Be Thy Name ☼
Having rented out a small stable just for the very occasion, the ogre of a cat-man Sharqkan found himself waltzing in towards the stable with two large black “Meladeers” in tow. Each one with a rope around its neck which he used to lead the creatures into the stable. He seemed to be covered in a myriad of cuts and bruises from head to toe, as though he had been punching above his weight class. But he had been and he had spent a great deal of time making sure that he caught these motherfuckers to the best of his ability. Unfortunately, he didn’t know why these damn deers only had one horn instead of a pair.

Plus both of the creatures appeared to look a lot like horses more so than deers. He had heard someone say something about a unicorn, but he didn’t know what the fuck that was. So he went ahead and, while still feeding the creature’s carrots, went ahead and made his way over towards his beloved inu, Anastasia, who found her cutie bootie placed on top of a bale of hay. He’d approach her with a large smile on his face, saluting his wife before gesturing excitedly over towards his large, horse-like deers. “Look at what I have accomplished, my beauty. Two meladeers for your viewing pleasure.” He’d look rather smug as he peered at her, noticing her lack of a flower.

“Hmm? What happened to your mission?” He went ahead and tied the ropes to a large wood beam. Making sure to gesture for his beloved to come and check out the sweet totally Meladeers that he had heroically subdued. Even though that shit was… very painful. He heard they weren’t that strong but… he stood corrected. At least for now, he wasn’t going to be going after those little guys again. Made you wonder how strong those Dark Unicorns were. “Oh~! Hugglebear, they’re beautiful!” the half-naked Anastasia gushed, hopping off her bale of hay to prance closer for a good look while he tied them up. “And bigger than I thought. So pretty! I love them,” she grinned, accepting his explanation that they were, in fact, Meladeer and not the Dark Unicorns they really were. Such was the life of a poor, dumb Inu who had never traveled the world or paid much attention in class when they were learning about the animals of the world. All she cared about was what lived in the chilly north she had to deal with.

She was in nothing but her snow white underwear (she’d lost her clothes again in the end), slightly damp from playing with some ice, and a little sheepish because he’d already caught out her sizable failure in the face of his success. However, she was nothing if not honest. “While you were out there bravely taming those meladeer for us, I… met a couple of strange people in the forest and failed my quest,” she explained, popping the bubble and maxing the kit so she could put ointment on his scrapes. “The lady wanted these specific red leaves, but it turns out they are the same exact shape as the whole forest full of green ones and I can’t see the difference between the two…” ☼  Hallowed Be Thy Name ☼
“Ah it’s alright, strawberry surprise. I am curious as to why this task was hard to accomplish, however, I am glad you didn’t exhaust and hurt yourself for the sake of the client. You must be different in terms of being colorly abled. No biggy!” He didn’t shy away from her as she started to apply the ointment to him. He was just too caught up in the entire knowledge bomb. She was basically colorblind. But he wasn’t sure what that was like. Still, it proved something important. She was able to be objective. Seeing the world in black and white? That was impressive. Or so he recalled.

He watched her closely as she began to use the kit on him. He was very curious about her day and the things that she had done in order to feel accomplished. To that end he felt sad by the fact that she didn’t seem to have the confidence in herself to go out there and find the flower. “Tell me more about these strangers? Did you want them to join our pack?” He beamed a large smile at his beloved inu, wanting to see if she had made any new friends. He didn’t even think about the fact that someone could have had a negative interaction with her. She was just too impressive and far too amazing to view negatively.

He’d place his hands on his hips as he gave her the chance to explain herself placing a hand upon her head and rubbing her on the head for a little bit. He was the kind of guy that liked to showcase this affection directly. But he was practicing using gestures to communicate with his woman in a manner that showed he wasn’t just interested in having sex. She was clearly someone that he enjoyed being around. Even if she did fret over his minor injuries.

“Yeah, I have never been able to see colors. I’m completely colorblind. Everything is shades of gray, black and white,” she informed him despite his own unspoken conclusion, trying to remain stoic about it but it was clearly something that bothered her. There’d been a lot of teasing and ‘what color is this’ in her life, so it was one of the few things that remained a sore subject. Ana wanted to think that Arq wouldn’t end up being one of those, but she also couldn’t claim to know him a ton. “I only took the job because the lady said its shape should stand out, but it looked the same as the others as far as I could tell,” the Inu frowned, very nearly pouting. Red and green were the exact same tone.

Switching gears, her expressions lightened into one of thoughtfulness as she continued to mend his little owies. “Well... they were weird. I don’t mind them, but I think Bass just wanted to see me naked and Bleuenn had really cool ice magic, but she took the ice wall away because I wouldn’t put my clothes on. So I didn’t get a vibe that they would fit into our pack,” Anastasia explained, putting her cotton ball away and giving patches of skin above the ointment cute little pecks. His beloved wife, while a bit unfamiliar with nicknames and skittish about the love stuff, was quite free with her affections. As his hand gripped her hip and he patted her head, she all but melted. Her ears were perky and twitching happily as her tail vigorously wagged. “I’m happy you’re back,” she smiled, sliding even closer, taking his touches as an invitation, to kiss his chest and snuggle. “I guess it’s just you and me for now.”