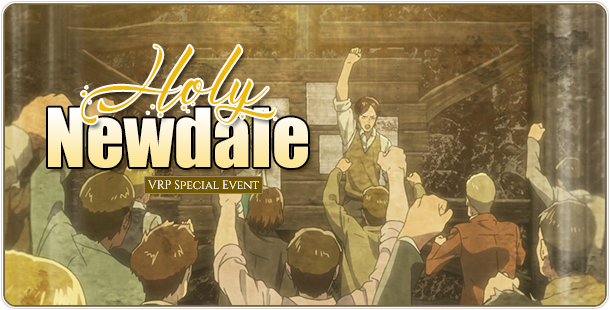 If you are here you have made it in time for Vyldermire RPG's very first SPECIAL EVENT!

By choosing to participate in the exciting event, you will have the opportunity to take part in some exciting lore affecting special quests that will affect the site's progression and become a part of its history.

If you haven't already taken a look at The Chronicler, here you will see our little teaser that hinted toward the event a while back. 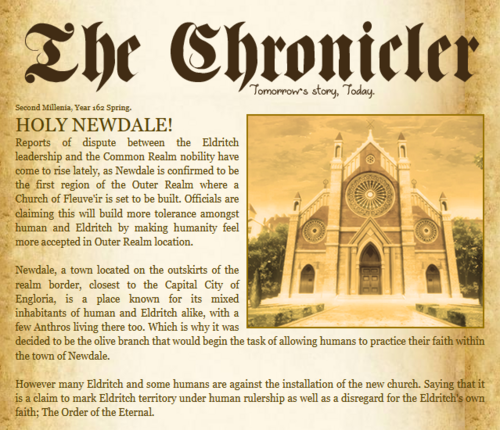 Event Details
News has released that the discussions regarding placing a Church of Fleuve'ir in the Eldritch region of Newdale have finally come to a head and construction is scheduled to begin this week! However, there are many who are still against the idea, and the news has spurred a series of debate and conflict. As such there are protests groups that have begun to gather at the construction site, some for the build of the church and some against.

When partaking in this event you will need to do work that either supports the 'FOR' the build of the church or is 'AGAINST' the build of a Fleuve'ir church in Newdale.

Special Event Quests
Below is a series of special prompts that players can use for their participation in the events. You can either do this SOLO or in a GROUP up to 6 characters. You can spawn your own enemies and add details to them as you please, (please do not use any NPCs of high-lore calibre i.e. royalty, nobility, members of specific factions etc). Once you have completed your event quests and fulfilled the word count requirements you will be required to include a summary of the events of your thread so that we can determine the result of this event and how it will event our world's lore.

Requirements
✧ 1-6 Players Per Thread
✧ 2,000  Words Per Person
Combined WC's do not need to be met by each individual but rather the group as a whole. So if one player is unable to meet the requirements of the event wc before the event's deadline, the other participants can compensate the remaining WC so as to not lose the work put into the event.

How to sign up/turn in special/event quests
To sign up and turn in event quests, just use the normal quest sign up and quest turn in threads. When signing up or turning in please be sure to use the templates labelled 'Special Quest'  include the Event name 'HOLY NEWDALE'.

Rewards
✧ 500 EXP Per Person
✧ 350 REP Per Person
✧ 7,500 VylderGold Per Person
Please note that ALL boosts, bonuses, SP, or Alignment benefits do no apply. You will ONLY receive the rewards above.

NOTE FROM THE ADMINS
We thank you in advance for participating in this event, this is really important to us because it's our first attempt at an event here on Vyldermire. As such this is sort of a test run for bigger and heavier events that we have planned for the future, things may change throughout the duration of the event should things not function effectively. That being said, we look forward to seeing the stories you create and we hope you have fun!

Here we will list the completed event quests as a means to track the events progression and assess how it will affect the outcome of the lore.
Bonus Chapter :: Shipment Saboteurs.
@Daphne , @Colter
Daphne receives a letter from her family who are outraged by the construction of a Church of Fleuv'ir on Eldritch territory. Pressured into working against this outcome, Daphne enlists the help of Colter to sabotage a shipment of building materials travelling from Lyndon Port to Newdale. Using a combination of their skills and magical disguises, the pair ambush the transporters. Daphne using her dream magic to manipulate their minds and causing the men to fight one another, knocking each other unconscious and leaving Daphne and Colter free to rob them of the goods. The men are left to wake up hours later, robbed of both their valuables and the building materials.

Fight Hate with Love
@Luchta Dagda
With the new church being constructed in Newdale, Luchta travels to the town in order to try and be a peacekeeper who looks after the workers caught up in the middle of the political and religious tension. He breaks up conflicts, raises the morale of the workers through songs and does his best to supply food, water and rest to those doing their best to build the church.

A Day of Witchery
@Edwin
After reading the town's paper regarding the building of the Church of Fleuve'ir being built in Newdale. Edwin takes up the task of cursing the building, venturing out into the nearby forest, Edwin gathers ingredients to perform a ritual that will curse the building.

Bound for Newdale
@Isla Paledragon
Isla is hired to be a part of the caravan carrying supplies from Lyndon Port to Newdale when on the third day they are ambushed by eldritch fanatics hoping to stall the construction of the church.

On Religion
@Hibiki
Hibiki journeys with a small crowd from Engloria to Hoptus Forest to collect lumber that will be used in the construction of the church. Along the way he learns about the religion of this world and has a chance to reflect on both the beliefs of the Church and the possibility that there may be different Gods here.

Double, double, toil & trouble;
@Penelope
Penelope and Noelle Ravenwood gather ingredients for a dark curse. After collecting everything they need, they return to the Shambles to see their family who have gathered a number of witches to assist them. The coven come together to hex the site of the Church being built in Newdale, successfully using dark magic to curse that spot so that regardless of whether the Fleuv'ir Church is built or not, that area will forever be cursed with sorrow and misfortune from here on out.

Blood & Snow
@Bleuenn Bosser @Daiko @Kiigan @Wes @Trishna @Emi Kazama
Bleuenn, Emi, Trishna, Wes, Kii and Daiko work together to defend a shipment of wood from Mackemm Village as all other shipments have not been able to make it to there destination. While the group seemed to be unorganized and at odds. They were able to put their differences aside to defend the shipment from a well armed Anthro group that does not wish to see humans and eldritch cooperating, in the belief that the two races would bring about a new wave of slavery.

The Right to Pray
@Iris @Rowan
Rowan and Iris patrolled the area near the church to keep the protests peaceful when things started to get a little out of control. Initially, it was just Eldritch lashing out, unhappy that their territory was being invaded and that one of their own "turned traitor" by being on the side of progress, but another group used the rowdy crowd as cover and escalated to full-blown violence. The band of trained humans in cloaks attacked with deadly force to stop the church from being built, headed by a mysterious woman in a black cloak. The criminals were ultimately either killed or taken into custody, but the leader, after separating Iris from the Golden Titans and tormenting her, managed to escape.

Extremist
@Shane
Shane travels to Newdale with the intention to help out. When he arrives, he's assigned to the food distribution team but the food has arrived late! He goes with one of the church crew to check it out and walks right into a plot to lace the food with poison. Shane manages to stop the perpetrators but also ends up being beaten up badly by a powerful foe that reveals himself to be a member of an extremist organization.