On a sidewalk of any other street you would find in Engloria, stood a bench that would usually would not draw anybodys attention, even if there were people sitting on it, this bench was far enough from the busy street center that it would barely be noticed if one didn't look for it. Today though it drew all the attention as a young man with a particular dissatisfied expression on his face sat there and was reading books in a very unusual manner. Not only had he a towering pile of books next to him, there were countless book pages cast on the ground ripped out of their covers, who were similiarly discarded next to them. The silver haired man also sat on the beck rest of said bench, bare feet on the bench. His eyes darted across each page fast then anybody should be able to read and once he was seemingly done with a page he ripped it out of the book and let it drop on the floor. That is to say, none of these books even belonged to him to begin with, all rented from a local library and now treated like trash. Of course he was aware that he would have to would have to give them back at some point in the near future, but the being calling itself Silver didn't know to concern himself with such things as guilt or duty. After reading through his second book, starting the third, he determined that this form of assimilating information was highly impractical and started ripping the pages of what he'd read out of their books because they'd become useless. That alone would have already caught a few gazes, but that paired with his gloomy look and the obviously sickening aura around him, caused most people passing to avoid him as much as possible. At this point it was likely that someone would be telling authority that there was a suspicious man sitting here but there were more things that Silver was unaware of, for example common sense and danger. On top of that he was mumbling things to himself. Was he a homeless person? Someone just straight up crazy? Nobody could really tell but everyone regarded him with both carefulness and displeasure. Looking closely on could see him nodding off into sleep a few times throughout his reading spree, to which he would mumble to himself that he only slept three days ago and that this body was very difficult to understand. With heavy shadows under his eyes from being sleep deprived and an occasional growl from his tummy, he sometimes would just look up from his books and survey his surroundings. What nobody seemed to know was that he had sat there for two days and nights straight only reading books or staring off into nothingness without eating or sleeping but also nobody seemed to want to approach him and tell him off since he didn't concern himself with passerbys or cause them trouble. A few had become very suspicious of him though while he was just discontent with what books had to offer. 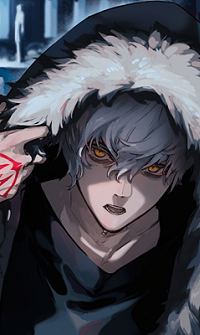