A Call for Aid [ Ares | Wiessman

Smoke billowed into the air as torchlight broke through darkness illuminating the damp road ahead. Spring had come bathing the planet in its warm embrace, warm breezes thawed the once chilling nights. Hooves clicked against the stoney pathway as the caravan moved to enter the city. Escorted by makeshift guards for the roads, this ragtag group looked exhausted from their travels. Burdened down with the few belongings they possessed that could be carried away along with the clothes on their backs.

A small group of refugees from an out-skirting village to the grand city of Newdale, the middle ground for progressive mindsets. Being warm and wet at the same time had to be the most uncomfortable feeling, a raw rubbing sensation against rough cotton. Wagon wheels splashed in small puddles as mud turned to cobblestone, their passage leaving a path of muddy footprints. Pods of bystanders near the gate watched with hushed whispers, it was not uncommon to see displaced families find a new home due to some small evil. Here within the city walls, one could be ‘safe’, unburdened by the outside but trapped inside like a rat in a cage.

Even as they approached to enter the guards had come to greet them. Getting them settled in, they were directed to a local tavern to stay. The Dallas Tavern was a cleaner place to reside unlike its counterpart further down the slummed streets. The Dallas was a central spot in Newdale about a football field away from the front gate, it not only offered to lodge but stables for one's animal companions. As the door swung open to embrace the weathered group, warmth flooded out into the rainy night embracing their bones. At first, they came in like a small flood but dispersed into their separate families to find seating. With the late hours of the night, the main hall was primarily empty aside from the staff and one other man whose back remained to them.

There were two hearths in the building giving Tynkia one side to warm himself, providing the large group the larger heart on the left side. Mumbling voices broke the overwhelming silence as children came to life with the flames. Numbering about twenty in total, about ten of them could actively hold a weapon and fight. The rest were mothers, daughters, young sons, and the elderly all escaping a gruesome fate.

“Aye! Lydia get these people some blankets! Rosco you start up a big helping of some stew for the children.” A small round man barked orders from behind the bar counter, both assistants went to work to aid the needy family. “Please, come sit down..” Udyr gestured a scarred hand to one particular individual in the group. This lone figure was a woman standing about 5’11 and clad in armor that had recently seen battle. Lydia soon reappeared from a side room with blankets under each arm, each family took a few to wrap either their children or the elderly.

Metallic boots clicked on wood as the armored woman approached and sat at the bar. Udyr swiftly pulled up a clean mug and gestured to the wall. “What will it be?” He asked lightly, copper eyes stared into the woman's minty green optics, at first she was unsure then she pointed to one of the kegs on tap. “Ale, please.. Thank you..” Crimson touched Udyr’s cheeks as her voice greeted his ears, she sounded angelic with a soldier's bite.

“Aye lass, could you tell me what happened?” Udyr asked as the full tankard appeared before the woman, she drank with hearty gulps draining the tankard with ease. Setting it down she gestured for a refill before removing her helmet. Thick brown hair tumbled down to mid-back damp with sweat, it had been kept in a tight french braid to keep it together.

“My name is Captain Reynold, you may call me Ivette dear barkeep. Our small settlement was raided by bandits. We have been combating them for days on the road to Newdale and many did not make it.. This handful is the last to survive, we did however strike a decisive blow.. We took out two of their leading commanders leaving one left. Their numbers have also dropped from injuries alone I hope. These people are not soldiers nor fighters, just farms, and artisans who wanted to live peacefully. Two of my own companions stayed behind with those who would not flee..” Bowing her head she clasped both gauntleted hands together releasing a shudder. With a full tankard, Ivette downed the amber liquid easily.

“Bandit’s you say? That is just terrible, I am sorry to hear that. Please have the second floor, it is empty and the rooms are ready.. Your expenses tonight are covered, will you be going back to fight them?” Udyr asked lightly as he looked from the group to the woman then over at the lone Tynkia in the corner. His spear laid out across his lap like a seat bar.

“Alas I cannot, I do not have the people, I must report back to my superiors and make a formal request for more men. Is it possible to make a request for aid here?” Ivette leaned forward in her seat, the longsword at her hip knocking against the counter. Her eyes burned with ambition and dire need.

“Well Ivette, you can always put in a request at the boards upfront. Or even request aid from the people. Though that may need to wait till morning when more people are around..” Udyr did not point her in Tynkia’s direction, the man smelled of iron and decay. It baffled him that Tyn could even drink with that lingering aroma of death about his cloaked figure. 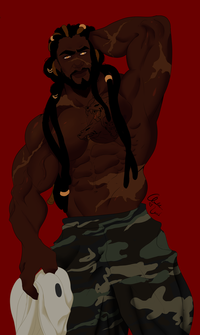