Robaire lurched forward at this seat, heaving uncontrollably onto the table - onlookers turned, the sound of a choking man drawing their attention in the quiet tavern. Robaire struggled to control it, but his resistance only caused his fit to grow stronger; a welling dread rose from Robaire's chest as the blackish red blood poured from his mouth after what felt like minutes of labored coughs.

Robaire had seen this before, it was the same poison which had killed his liege and friend. He knew at that moment his life was forfeit, his attempts to do good for the common folk a threat too great for the corrupt nobility which controlled his nation. Darkness crept at the corners of Robaire's vision, the world closing in around him in a dreadful reminder of what was to come.

Watching men die had taught Robaire only one thing - there was no God, no afterlife. Dread the darkness all he could, he knew there was no fighting it. Rising to his unsteady feet Robaire refused to die off his feet, he would not give his enemies the satisfaction of the tales of Robaire the Ugly, dying alone in a commoner tavern table.

A confident, if not unsteady stride, took Robaire out of the tavern. Bloody coughs came in spurts, but all the same soon Robaire was tying the fasteners on his plate helm.

Robaire's stride ceased, his form still but upright - death had taken him, but none would say Robaire died a dishonorable death.

Wings fluttered roughly, the small bird angling it's feet outward as it used it's wings to slow it's momentum at the perfect time to land softly on the still figure. The thing, a metal man, had stood unmoving like a statue near the portal - and for as long as the bird knew it had been there.

The soft hum filled the quiet forest clearing, the dilapidated stone ring softly vibrating as slowly each mark around it's edge came to life with a faint glow, of colors indescribable and unnatural. As the glow reached the broken portion the hum suddenly grew, the harsh shaking causing the small bird to flee from it's perch on the metal man.

A harsh, tearing sound followed - echoing across Hoptus Forest with it's horrendous, mind warping sound. As if tearing at the edges of reality tendrils of energy began form in the air at the center of the ring, any attempt to gaze directly at them caused a mind numbing sensation and a warping of vision which could best be described as if one's perspective was shifting from the self to outward. The tendrils seemed to be grabbing at something unseen in the air, their motion the sense of resistance in their movements making it seem as if they were literally ripping strips of reality open.

Soon the portal was filled with an inky, kaleidoscope of colors which rolled and took shapes - a white noise overpowered all other sounds, yet at the same time felt quiet and distant. From the portal came a single shape, transparent but clear in it's shape. It was a man wearing full plate armor, his eyes literally shining a wavelength of light that couldn't truly be described as a color.

Soon transparent man was nothing but light, and all at once it was gone - the portal slammed shut, the white noise ended and the bright white light that was the transparent man was gone. Birds returned to their songs as if nothing had occurred, and the forest went on. The creak of metal disturbed that natural wonder.

The metal man craned his neck side to side, the the cracking sound of joints filling the silence.

Robaire looked up to the sky of the new world he had arrived at. What this body was, where it came from, he did now know - one moment he was dead, and the next a force he could not comprehend had forced him through a portal where a replica of his own form stood unmoving. "So I live." Robaire said to himself, finding his voice sounded exactly the same as it did.

If any were around they would hear only bewildered laughter, uncontrolled. 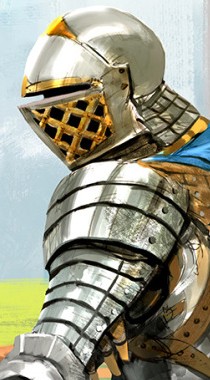 Far and in between were the days in which the Mirinah Portal offered anything of interest. Normally the intricate stone archway lay dormant, undisturbed; the only sign of life being the creatures that would go about their day oblivious to the contraption's mysterious nature. And, in some sense, Logos much preferred it that way. It was... peaceful. Who knew what sort of being would emerge next?

Yet, that same question held an allure that kept the giant beast coming back time and time again. That which was foreign to him had always been enticing as the portal never failed to deliver.

And deliver it did.

It had been a few days since the stranger arrived. A man, frozen still like a statue and bearing unfamiliar armor, stood at the portal's entrance. At first, Logos had thought the man to be dead on arrival, maybe even cursed much like himself, and ultimately decreed that watching from afar was the better option. So he waited, his body hidden among thick trees and darkened by their shadows.

He was not at all prepared for the man's birth into this world, however, as a spectacle of magic followed in his wake - scaring away any nearby life. A low hum turned unpleasant noise; tendrils that made Logos so dizzy he closed his eyes; an array of colors followed by what seemed like a transparent shape that soon vanished into light. The portal closed, and in place of the statue was a man who lived and breathed - a man who laughed.

The man was pure. Born anew into the world by magic and yet untainted by what laid beyond the forest.

Logos snorted from his hiding place between the trees. His large yellow eyes seemed to glow even brighter within the shadows. He took a step forward, and then another, and another until his large body came into view. He snorted once more, a bellow of smokey breath escaping his nostrils as he pawed at the ground defensively, rearing up as if he were to charge and kicking up large amounts of dirt.

"So you do live," came a deep voice from within Logos, the stone mask that made up his face unmoving as the voice almost seemed to reverberate. Even that which was beautiful could corrupt and destroy, he knew. And it was better to be wary.

In that same defensive stance, he continued to paw, walking closer to the man in search of a reaction. Would he attack? Would he flee? He did not know. But as he grew closer still he could smell it, even if it was the faintest of smells:

Once close, Logos towered over the man. His large face lowered itself to his height until they were mere inches away. He kicked at the ground behind him harder. A sign of dominance, of aggression. He bellowed another smokey breath.
WC: 485 | Total: 485 |  @Robaire