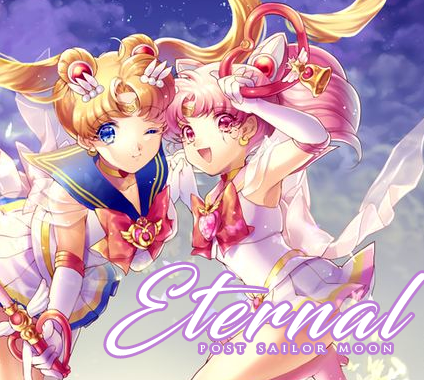 The Dark Alliance has faced a divide: Queen Nehellenia has been purified and now the Goddess and ruler of the Moon. With her purification at the hands of Neo Queen Serenity and Neo Sailor Moon, there is a shift in the wind – deities, heralds and Augurs from the past are being revived and Hades has been unsealed. With the coming of Hades has seen the unsealing of Satre and Hyperion, and the future is now even more uncertain as the ruler of Nemesis has a vendetta against Chronos…and more. The Future Moon have now since reunited with the Crystal Empire, their memories have been restored. Will they be able to save their future that they can no longer return to?

Eternal is a Sailor Moon role play, rated 3/3/3 and self-hosted utilizing MyBB, a software akin to JCink. We have a plethora of canons available including many popular ones. We’re set after Sailor Moon, merging the 90s anime, manga, Sailor Moon Crystal into one game. We accept original characters and use real life face claims.